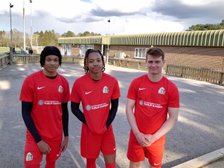 Our Under 23s reached the final of the Suburban League Plate with a hard fought, but in the end comfortable, win over Yateley United FC Development.

There were three changes from the team which started the win against Aylesbury Vale Dynamos in the last round, with Richie Mbele, Cassius Joseph and Rueben Doherty coming into the starting line up.

Fluent passing football was a struggle for both teams from the start, with a pitch that made the one at Aylesbury and The Rogers Family Stadium look like Wembley. It took almost twenty minutes for Borough to create the first clear cut chance, when Joseph’s shot from a tight angle on the right side of the area was well saved and the rebound fell to Leandro Jardim, who scuffed his effort and was also denied by the Yateley keeper, who immediately went down injured for five minutes but was able to continue.
Five minutes later, referee Mr Osborn had the whistle to his lips when Joseph was clearly fouled cutting across the area from the left hand side. However, he chose to play the advantage, which came to nothing, and no penalty was given.

There were times when Harrow seemed lethargic and needed an injection of urgency, notably when a corner was awarded, but with no supporters near the Yateley goal, nobody immediately stepped forward to collect the ball and the game grinded to a halt. Thankfully that injection arrived five minutes before half time when Richie Mbele did excellently to keep the ball under control on the difficult surface as he dribbled passed a couple of Yateley defenders, before squaring a cross from the right hand byline for Rueben Doherty to poke home.

It was another even start to the second half, as Yateley continued to hustle and pressurise Borough’s midfield, who weren’t being given any time on the ball, but Harrow should have doubled their lead on the hour. Yateley’s keeper ventured out to the left touchline to make a clearance, but was closed down by Joseph, who then crossed for Doherty, who somehow managed to miss the target with a header from inside the six yard box. A moment he will be grateful for not being captured on camera.

However, shortly afterwards Borough were able to double their lead when Kamal De Borg burst into the box and was sandwiched between two Yateley defenders. He stepped up to send the keeper the wrong way, and although there was still twenty five minutes to go, the result was now not in doubt.

Two became three five minutes later when Joseph was rewarded for more good pressure. After forcing one of the Yateley centre backs into a mistake he ran clear and calmly slotted passed their onrushing keeper into the bottom right corner.

With the game now safe, Godfrey Torto gave some minutes to four of his subs and understandably the intensity dropped slightly again. To Yateley’s credit, their heads didn’t drop, and they had a spell which should have yielded a consolation. Their most notable chances came from corners. Lovre Dražic, who had been largely a spectator for nearly eighty minutes, produced a fine double save, which showed why Bournemouth have invited him back for a second week on trial. After a corner came in from the right hand side, he dived to push one header away at the back post, but had to leap to his feet as the ball was chipped back across goal. Dražic scrambled to his left to make a Gordon Banks like save high to his left and keep his clean sheet intact. Moments later, again from a set piece, a Yateley attacker missed a header almost as gilt edged as Doherty’s, putting a diving header wide when unmarked at the back post.

There was still time for Borough to add a fourth, which slightly flattered them, after good play down the right hand side of the area. Deacon slid a pass through to De Borg who produced another composed finished for his second.

Borough’s youngsters must now wait to find out who their opponents in the final will be, with Sheppey United due to play the winners of Holmesdale Reserves and Merstham Development. We will advertise the details of the final as soon as we know them.