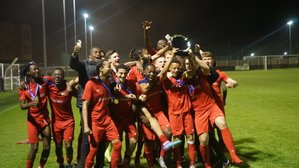 Our Under 23s ended their first season with some deserved silverware with a 1-0 win over Merstham in the Suburban League Plate Final.

Held at Abbey Rangers FC, who were excellent hosts and received compliments for their Inch’s cider and chicken bites, Harrow faced a strong Merstham side who had won the South Division.

On a hard and bobbly pitch, Borough started the brighter with Hicham Bouchareb looking the main threat down the right hand side. The first incidents of note came when Taran Rattrey and Merstham’s Mason Seagroatt, rightly received bookings, as referee Andrew Higgs started very authoritatively, making good decisions and communicating clearly with the players. Unfortunately, this wasn't to be the case for the full ninety minutes.

The first shot on target came from Leandro Jardim’s free kick on the left corner of the area. He whipped the ball with pace over the wall, but Merstham keeper Steve McIntosh saved brilliantly high to his right. Bouchareb was then caught, as he attempted to square the ball for Jardim inside the area. A penalty could have easily been given, but what was to be a rare advantage was played, and the ball ballooned up towards Jardim who attempted a spectacular overhead kick. He was denied by McIntosh who came out to punch bravely, but injured his arm in doing so, which clearly affected him for the rest of the game.

Merstham’s tempers began to simmer when a cross was blocked by a raised arm. Borough were allowed to break but the move, thankfully in terms of what might have followed, came to nothing. There were other occasions when Mr Higgs could have let play go on as Merstham started attacks, but blew his whistle, which raised the temper temperatures further. Richie Mbele was the second Borough player to be carded, and shortly after was involved in an off the ball incident. With many of the Merstham fans chanting for a second card, Mr Higgs decided to give the Borough midfielder what looked like a last warning. The half ended with both Jardim’s header and Joseph Madeinlo’s shot going narrowly wide of the right hand post.

Merstham began the second half strongly with a sustained spell of pressure and started to create clear cut chances, with substitute James Allen cutting in from the left and having a couple of shots that went wide of the far post. In fairness to Taran Rattrey, it may have been difficult to see the Merstham winger, as there was a pretty dark area on that side of the pitch due to a faulty floodlight. With the added factor of Rattrey being on a booking, manager Godfrey Torto brought on Flynn Duncan at left back, with Keegan Bloom switching to the right. It proved to be an effective move almost immediately.

Borough had weathered the storm and on the hour mark scored what proved to be the winner. Merstham left back Dan Stone brought down Bouchareb, with what wasn’t the first and certainly not the last, of late cynical tackles. Up to this point numerous free kicks had been floated into the area and not caused any problems. However, this time Flynn Duncan’s inswinging cross came in with pace and Leandro Jardim powered home an unstoppable header from close range. It seemed rather fitting that Borough’s Golden Boot winner scored the crucial goal.

Borough had chances to make the game safe on the break, with Madeinlo squaring for Bouchareb, but the Merstham defence scrambled clear. Their captain, Josh Parratt, a persistent offender throughout, caught Jardim on the ankle with a nasty late challenge that went unpunished. Whereas Harrow’s players have lost their cool when provoked in previous games, they deserve praise for keeping their heads and letting their football do the talking in this one. Parratt was finally booked for a foul on Kamal De Borg with five minutes of normal time remaining. Borough survived a goalmouth scramble before Jardim played in substitute Remel Larwood who found himself confronted by McIntosh outside the area. Instead of attempting a lob from the bouncing ball, Larwood decided to take a touch and the opportunity eventually went, but he used up some valuable seconds by heading towards the corner flag.

Harrow comfortably saw out a lengthy period of added time to clinch their first piece of silverware, cueing scenes that our young players will remember for years to come, with captain Keegan Bloom lifting the trophy in front of the travelling Borough support.