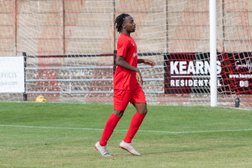 Our Under 23s progressed to the second round of the Suburban League Challenge Cup with a 3-1 win over Guildford City Reserves.

There was three changes from last week, with Kevin Songolo and Stany Mongha coming in for Rock Moses and Prince Kandolo, who was with the first team squad, as the centre back pairing. Maxxime Ndambi started at number nine and there was a reshuffle in midfield with Ibrahim Busari unavailable.

It was a much brighter start than against Hartley Wintney and Maxxime Ndambi's 25-yard effort went just wide of the left hand post. In the sixth minute, Keegan Bloom crossed a free kick into the box. With no hesitation, and without any noticeable appeals, the referee blew to award Borough a penalty, presumably for one of the Guildford defenders holding a Borough player. Ndambi stepped up and sent the keeper the wrong way from the spot.

Boro were fortunate to escape when they were too casual trying to play out from the back. Possession was lost on the edge of the area and a seemingly comfortable save was spilled by Lovre Dražić, but he managed to gather the rebound before a Guildford attacker could pounce.

A sustained period of Harrow dominance followed and the best chance to double the lead fell to Joshua Woodroffe when Ndambi broke down the right and squared a prefect cross. Woodroffe struck it sweetly, but was denied by an outstanding save from the Guildford keeper high to his left.

However, moments later the second did arrive. Whereas Borough had an earlier escape, Guildford were punished when trying to play out from the back. Good pressure from Jordan Hamilton resulted in him stealing possession from a Guildford defender on the right side of the area and he squared it to Ndambi, who despite not making the best of contact, managed to find the bottom left corner.

Boro sensed the opportunity for more goals before half time and Anthony Chinwada-Munroe’s shot from the edge of the area clipped the top of the crossbar. The third came when Flynn Duncan, who scored from long range last week, dispossessed a Guildford midfielder and unleashed a left footed arrow from 25 yards into the bottom right corner.

With a three goal lead and such dominance, the result didn’t seem in any doubt at half time and ten minutes after the break Boro should have added a fourth. Ndambi broke down the right and a goal looked certain as he crossed to Hamilton whose effort was saved by the keeper's legs. The rebound fell to Chinwada-Munroe, but a defender, possibly with the help of an arm, threw himself in front of his goalbound shot.
That block fell to Temi Amishaun, but he was also denied, this time by a superb save.

With half an hour remaining, manager Godfrey Torto made two changes and a third followed soon afterwards. However, this coincided with his team dropping off and making some careless mistakes. Guildford were having more possession than in the first half and started to get the ball forward much quicker. Their direct approach, with a number of balls over the top which forced Borough’s back line to turn, were causing all sorts of problems, and Stan Mongha and Keegan Bloom made vital blocks in quick succession. The visitors should have pulled a goal back from a corner, but one of their players hooked over when under little pressure inside the six yard box. However, with ten minutes remaining, they deservedly got their reward. A kick from the keeper’s hands landed in the Borough half and the linesman raised his flag as one of their substitutes was walking back from an offside possession. They didn’t attempt to play the ball and the referee correctly waved play on, with another of their substitutes latching onto the loose ball and raced through to score.

Guildford’s tactics continued to cause Boro problems and they should have pulled another goal back when one of their substitutes was put clean through, but Lovre Dražić blocked his effort. Had that gone in the last few minutes would have been very interesting, but it didn’t, and Boro’s youngsters progress to the next round.

To finish, a positive mention for officials David Goater, Barry Kyriacou and Martin Olver. In an age of on field officials not communicating clearly and linesmen being asked not to give even the most obvious of free kicks, it was refreshing to see them working well together throughout and the offside flag was promptly raise when a player was clearly offside, rather than the tedious wait which can result in a player scoring before the decision is confirmed.

Highlights and our post match interview with Godfrey Torto are available on our YouTube channel at:
https://www.youtube.com/user/harrowboro

Our Under 23s are back in league action next Saturday against Tring, with a 3pm kick off at The Rogers Family Stadium with free entry for all.