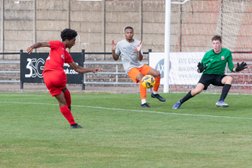 Our Under 23s made it two wins from two with an empathetic win over Hartley Wintney U21.

In a new, younger, line up, with just four players from their successful first season in the 14 man squad, it was a scrappy opening period with both sides struggling to string many passes together.

The visitors should have taken the lead after 15 minutes when they broke down their right hand side. The ball was squared to an unmarked attacker just outside the six yard box, but Lovre Drazic made an excellent block.

After 27 minutes, Boro were awarded a free kick on their left near the corner flag after a late lunging tackle on Anthony Chinwada-Munroe. Captain Jordan Hamilton’s cross managed to find an unmarked Ibrahim Busari who tapped in at the back post to open the scoring.

As the game went on, the influence of both Chinwada-Munroe and Hamilton grew, with the former setting up the latter for two good opportunities he should have done better with. Joshua Woodroffe and Ibrahim Busari also missed clear cut chances and Boro had to settle for a one goal lead at half time.

However, that changed ten minutes into the second half, as there seemed to have been a message to increase the intensity and take the chances their play deserved. Prince Kandolo’s excellent through ball from inside his own half put Chinwada-Munroe clear and he calmly wrong footed the keeper for Boro’s second.

Hamilton continued to threaten and after an hour he cut in from the right and the Hartley keeper did well to tip his curling left foot shot around the far post. Boro were now dominant and eventually made the game safe with just over 15 minutes to go. Hamilton’s cross from the left found substitute Gabriel Mendoza Cadogan at the back post, who still had some work to do, but blasted high into the centre of the goal past the advancing keeper.

It just wasn’t to be Hamilton’s day in front of goal, when after doing the hard work by beating two defenders on the edge of the box, he shot over with just the keeper to beat. But the win was sealed with the goal of the day in the last minute from Flynn Duncan’s powerful 25 yard curler into the top right corner.

Manager Godfrey Torto said, ‘It was a really good performance from us, especially with a few players missing. We played Anthony (Chinwada-Munroe) further forward as a number nine and he was outstanding in the way he stretched their defence, made really good runs and was dangerous throughout. We also played our full backs from the first game either side of him. Jordan, as captain, has been training with the first team and had a really good game and should have had a goal or two with the chances he had’.

‘Lovre made a great save at 0-0 which I think was their only real chance of the game, but after that we deserved to take the lead before half time. In the second half, the game was mostly played in their half. Flynn (Duncan) scored a fantastic goal and is performing really well. We’re really pleased with how he has started the season and hope he can kick on. Although we scored for in the end, we can still be more clinical given the clear cut chances we missed and on another day might have been costly. We have a cup game next week which will be tough, and we’re still looking for players who may be able to strengthen what we have’.

Our Under 23s next game is at home to Guildford City Reserves next Saturday in the The Michael Bidmead Challenge Cup.