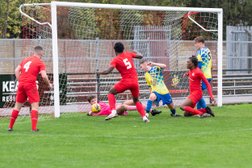 A goal on his debut from Rhys Hajro ensured our Under 23s maintained their undefeated start to the Suburban League North season.

After an even opening period, the visitors took the lead with a great finish from 30 yards following a poor defensive clearance. But Borough recovered well, having the majority of possession and creating some chances. The equaliser came before half time from Prince Jordan Kandolo's great long through ball to Rhys Hajro, who controlled well before dinking the ball over the advancing Aylesbury keeper.

The second half followed a similar pattern and although Borough forced numerous corners and other situations in and around the Aylesbury's area, they failed to create enough clear opportunities for a winner.

Manager Godfrey Torto had mixed feelings about the performance and the result. 'While we were the better team, I don't think we did enough to say we deserved to win the game, and a draw was a fair result. With the possession we had, we should have created more, but I don't think we should enough attacking threat and need to be more clinical'.

'On the positive side, we're still undefeated and some key players retuned today. We again missed Maxxii (Ndambi) in the final third, who will hopefully be back next week'.

The result means we are now second, two points behind Flackwell Heath, but with a game in hand. We face Aylesbury again this Saturday, this time away in the league cup.