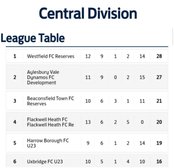 Harrow  under 23's continued their impressive  start to the season  with a two nil win over AFC Hayes at Earlsmead.

Exchanges were equal for most of the first half.  The break through  came after the visiting keeper  failed to deal with a cross,  the ball found it's way to Rock Moses to shoot home for a home debut  goal.

Boro had the majority of possession  in the second half. They put pressure  on Hayes when they had the ball, which paid dividends when Rueben Doherty scored Harrow's second goal.

Boro  had chances to extend their lead including two one on ones, but the game  finished 2-0.

Manager  Godfrey  Torto  commented  "it was a  pleasing result , particularly with no goals conceded."

Harrow stay 5th in the league table,  with games in hand on all the teams above them.