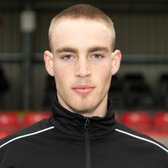 A third consecutive win lifts Boro up to third in the Suburban League Central Division.

Harrow arrived with confidence after their last two results to a very cold afternoon away at Cove.

Harrow started the game generally dominate in possession however with the wet conditions often misjudging final passes in the initial exchanges.

While some chances were created Harrow did not take advantage of those opportunities early on. As the game progressed a simple ball into space behind the Cove defence allowed Hayden Brown a run on goal which he slotted well down to the goal keepers right bottom corner of the net.

It soon became 2-0 as Lemar Griffith extended the visitors lead.
Harrow continued to create chances and Hayden Brown got his second of the game to put Boro three up.

A few chances were wasted in the second half before another goal was scored by Hayden Brown which rounded off a hat-trick for the forward.

As the conditions began to worsen, Harrow made a number of changes using all five substitutes and seeing the game out for a fine four-nil victory.

Next Saturday the under 23's entertain Chalfont St Peter at Earlsmead, kick off 3pm.