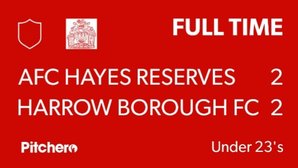 Our U23's had to settle for a point in their latest Suburban League Central Division fixture.

Harrow went behind to a goal on the break after 10 minutes as a defensive mistake allowed the ball to run through to a Hayes forward who rounded Harshvardhan Tharkeswar in the Borough goal to slot home.

Borough regrouped and continued to probe, looking dangerous and creating some very good situations around the box without converting. They should have equalised when Reuben Doherty crossed for Leondro Jardim, who from point blank range hit the Hayes keeper. Shortly afterwards Harrow were level thanks to some great footwork outside the box from debutant Hicham Bouchareb, which resulted in a fantastic finish into the far left corner.

Just before half time, Borough won a free kick on the left edge of the Hayes box. Leandro Jardim stepped up to guide his free kick over the wall into the bottom left corner to give Harrow a 2-1 lead at the break.

Borough started the second half well and should have gone further ahead after creating a number of chances. However, Hayes made them pay after another defensive mix up allowed them to make it 2-2.

Despite playing on a heavy pitch, both sides pressed for the win with Harrow hitting the crossbar and Hayes creating a couple of half chances. However, neither side could find a third goal and they shared the points.

Manager Godfrey Torto said, 'I'm a bit disappointed with the result given we got ourselves ahead, but am pleased we took something from the game. Today is a setback, but we now face two huge games against teams above us which we can hopefully come away with two wins from'.

Next Saturday Boro U23's entertain third place Uxbridge at The Rogers Family Stadium. Kick Off is at 3pm with free entry.