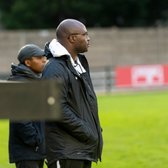 Boro's U23's moved back into third place in the Suburban League Central Division with an impressive win over Uxbridge.

Sam Stewart, returning after injury, opened the scoring with an unstoppable 25 yard strike into the top left hand corner. Rock Moses then doubled the lead, volleying home from inside the six yard box from a Borough corner.

Uxbridge then started to come into the game and had the chance to pull a goal back from the penalty spot following a foul from Lovre Dražić, but the Harrow keeper made a fantastic save to keep the two goal lead intact. However, a mistake from a short goal kick allowed the visitors to pull a goal back before half time to set up a tense second half.

Uxbridge continued to press after the break, but Harrow's defence weathered the storm and did well to limit their clear sights of goal. Borough were then able to reassert their authority and scored two more excellent goals. Ernest Njoroge, on as a substitute at left back, put new signing Yasin Ben El-Mhanni clean through and he calmly slotted past the Uxbridge keeper. Caleb Mensah’s hard work throughout the game was then rewarded as he sealed the points with a strike from the edge of the area.

Manager Godfrey Torto was delighted with the win and performance. 'We have a lot of respect for Uxbridge and were expecting a tough game with the run they’ve been on. We started well, went two up and it could have been more, but they came back into the game and Lovre gave away a penalty but atoned for it with a brilliant save. Our mistake meant that we went in at half time at 2-1 and we spoke to the players about where we needed them to improve in the second half’.

‘The boys did that, so we were able to kick on and deserved the win, with four really good goals. A couple of new players also came in and did really well, so we go into next week with confidence and momentum. Hopefully the players keep learning as we have a very talented team and are top scorers in the division. We just need to pick up a bit more game know-how as we have conceded a few through errors, but that’s because of the youth in the team and it will come through more experience’.

The win allowed Borough to close the gap at the top to Aylesbury Vale Dynamos to four points, who we travel to in a huge game next Saturday. Both teams have six to play and are separated by Westfield who have played a game more - and who we play in the penultimate game of the season.