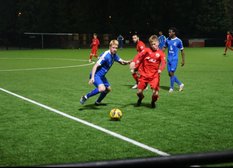 U23s close gap at the top

Our Under 23s moved to within a point of leaders Aylesbury with an outstanding win over a very strong Beaconsfield team.

Borough started brightly with some sharp passing, but Beaconsfield had the first chance when Aaron Minhas, one of their first teamers on duty, had a left footed shot well saved by the boot of Lovre Dražić when it was heading for the far corner. Yasin Ben El-Mhanni then curled a left footer just wide with Borough’s first attempt of note. A tight twenty minutes followed and centre back Giseldi Marashi was booked for a trip on forward Andrei-Chirac.

Apologies for the shortage of Beaconsfield player names as team sheets were hard to come by, but I am reliably informed that eight first team players were in their line up so got some positive I.D's from our supporters in attendance.

An excellent rule in this competition, which was news to the first team staff on Beaconsfield’s bench, is that players can be sin binned for dissent for ten minutes. That’s exactly what happened to first team captain Scott Donnelly after half an hour and he was fortunate not to have been sent to the dugout sooner. However, Borough couldn’t make their man advantage count and the best chance they created in that period was when El-Mhanni played in Leandro Jardim. The striker was forced wide by the keeper and managed to chip the ball back across the goalmouth, but none of his team mates were up with play to finish the move. El-Mhanni was lively throughout the half, showing his skill and pace on a couple of occasions, but was crowded out easily by a couple of defenders.

As half time approached, captain Keegan Brown was fortunate to escape a booking for a reckless lunge on Beaconsfield's 10 after failing to shield the ball out of play. A sustained spell of home pressure followed and Andrei-Chirac should have done better after taking on two defenders before blasting his left foot effort wide, meaning it was goalless at the break.

After a quiet, but intense start to the second half, Harrow took the lead just after the hour mark. Some excellent pressing from El-Mhanni led to him playing in Sam Stuart on the right hand side and his cross was sliced into his own net by Beaconsfield's 3.

Ten minutes later Borough doubled their lead when Jardim was played through and he unleashed an unstoppable right footed arrow into the top right hand corner from just inside the area, which no goalkeeper would have got near. He went down with cramp before he could celebrate and while he was down again minutes later, Beaconsfield pulled a goal back. Borough missed a couple of chances to clear the ball on the edge of the box and eventually a home attacker was able to get a shot away which hit the post, with Andrei-Chirac tapping in the rebound.

It could have been a nervy last ten minutes or so, but Borough’s youngsters deserve a lot of credit for seeing the game out with relative ease and should have added a third with the chances they had on the break. First team manager Steve Baker was watching on and would have been impressed with a lot of what he saw. He must have also been wondering how his team conceded six to what was mostly the same Beaconsfield team, giving this performance some perspective.

Manager Godfrey Torto said, ‘We knew it would be a tough game and before tonight Beaconsfield had lost the fewest games in the league. With it being played on a Monday we also expected them to play some first team players, which they did, and more than we thought they would’.

He added, ‘Kevin (Songolo) came in at centre half and I thought he was superb, and there were some very good performances throughout the team. We started the game well, but our intensity dropped, which we spoke about at half time. We wanted the lads to show more passion and intensity to press the ball, which we did and it led to our first goal. The second goal was well worked and Leo is a fantastic finisher. From there it was a matter of seeing the game out. I was disappointed with the goal we conceded, which was a bit sloppy, and we could have done better with the chances we had on the break after that. But overall it was a brilliant performance and I’m very proud of all the players. We need make sure that we take tonight into Saturday and keep up the pressure for the run in’.

Borough’s youngsters will be aiming to keep up the pressure at the top when they face Farnham Town at The Rogers Family Stadium on Saturday. Their following game, away to Aylesbury in the cup, has been moved from next Tuesday to Wednesday, with a 7.45 kick off.
For an up to date league table, please see: https://bit.ly/3i8fkcf

Subs:
12 Reuben Doherty (on for Jardim)
14 George Deacan
15 Kamal De Borg (on for Larwood)
16 Hicham Bouchareb (on for Joseph)
17 Richie Mbele (on for Tumilty)