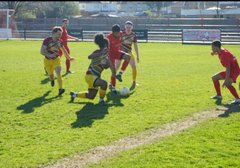 Our Under 23s were brought back down to earth and their title hopes dealt a huge blow, as Farnham completed the double over them in comprehensive fashion.

Manager Godfrey Torto made three changes from the team that produced an outstanding victory at Beaconsfield on Monday, with Rock Moses, Richie Mbele and Hicham Bouchareb coming into the team. Yasin Ben El-Mhanni was in the first team squad, Shea Tumilty dropped to the bench, as did Kevin Songolo, with his delayed arrival meaning a late change to the planned line up. In hindsight, that perhaps set the tone for what followed.

Borough had by far the better of the first half, without causing Farnham Keeper Josh Woodcock much concern. Keegan Bloom and Hicham Bouchareb were the main threat throughout the afternoon down the left hand side, and the latter’s pull back found Leandro Jardim, but his effort was superbly blocked by a Farnham defender. Remel Larwood and Kemari Messiah were then both booked for fouls on Ben Bauchop, and were the first of five Harrow bookings in a feisty and competitive, but not dirty, game. However, there were certainly some confusing decisions from referee Martin Oliver, especially in the second half, when he came close to losing control of the game.

Both teams were struggling with the strong breeze, Borough in particular, and playing towards the clubhouse they launched numerous long balls forward that held up and were comfortably dealt with. Harrow’s only other noteable chance of the half came from a Cassius Joseph cross which was met by Jardim, but his firm header from near the penalty spot was straight at Woodcock.
Giseldi Marashi and Connor Young were also booked for squaring up to each other and there were no further chances for either side in the ten minutes up to half time.

Rock Moses was feeling unwell and was replaced by Kevin Songolo at half time. Borough’s back line must have still been adjusting to the change as Farnham took the lead two minutes into the second half. The visitors were awarded a free kick and with Harrow half asleep, Admir Ukjaj’s looping 25 yarder beat Lovre Dražić, possibly taking a slight deflection on the way.

Borough continued to have plenty of the ball with lots of neat play up until the final third, but with little cutting edge up front. Their best and only real chance of the half should have seen an equaliser, when Joseph’s cross was knocked back across goal by Bloom, but Sam Stuart prodded a weak effort straight at Woodcock. Bouchareb continued to threaten, but as he cut inside from the left the ball took a huge bobble and he blasted high and wide. The first of a number of head scratching refereeing decisions came with the booking of Cassius Joseph, when it seemed he was the one being fouled, and Bouchareb was also cautioned for what looked like a clumsy challenge rather than a bookable one. Given Beaconsfield had a player sin binned for back chat on Monday, it was baffling how Farnham escaped that punishment, with goalkeeper Josh Woodcock a persistent offender throughout the game.

Farnham doubled their lead when Borough were caught dozing for a second time in similar fashion. A quick free kick over the top put Jay McGrath clean through and he calmly dinked the ball over the onrushing Dražić.

Kevin Songolo, so commanding at Beaconsfield, was having a torrid second half and badly misjudged a long goal kick in the wind, which he was fortunate not to be punished for. Farnham continued to create chances, partly through their own endeavor and partly through Borough’s lethargic play, with Dražić making a couple of fine saves to prevent them adding a third. However, the third eventually arrived from a short corner on the left hand side. A low cross was whipped in and an unmarked Rushaar Samuel nipped in front of Dražić to score, with Borough’s backline again in disarray.

It was certainly a below par and flat performance from Harrow’s youngsters, but Farnham fully deserved the three points and outperformed their mid-table position. How quickly the picture can change, as with Aylesbury winning at Beaconsfield, our youngsters now find themselves four points behind the leaders having played a game more. They travel to the Chilterns on Wednesday evening in the cup with for a 7.45pm kick off.

Godfrey Torto was understandably disappointed with how his team performed. ‘I felt we didn’t prepare properly for the game and the late change in defence didn’t help. We were too lethargic and showed a lack of energy. Farnham’s tails were up after beating us in the first game and we didn’t match their work rate and energy.’

‘We let ourselves down today and it was also the first game where haven’t scored. But you have to give credit to Farnham, who worked hard as a team and they deserved the win. Hopefully it’s a learning curve for our players and we need to put things right in the cup on Wednesday’.