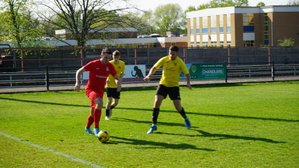 Our Under 23s moved to the top of the Suburban League Central Division with a dominant win over Westfield Reserves.

Taran Rattrey started at right back, and after a couple of substitute appearances, Joseph Madeimlo made his full debut on the left wing.

It was a fairly subdued opening, with the main incident to report coming when referee Tony Aslam was hit powerfully in the head from an attempted crossfield pass. Fortunately, after taking a few minutes to recover, he was able to continue.
In terms of the play, it was fairly even until Borough started to create some clear cut chances mid-way through the first half. The best of those came when Remel Larwood’s clever pass put Leandro Jardim through, but the striker’s finish lacked conviction and Westfield’s keeper easily blocked it. However, Jardim did open the scoring after half an hour. Madeimlo turned cleverly on the left side of the area and crossed for an unmarked Jardim. His powerful shot was straight at the keeper, who took the sting out of it, but the ball trickled across the goal line.

One brought two, as a couple of minutes later Remel Larwood cut in from the left and had a shot blocked by the keeper’s feet, but the rebound fell kindly to Rueben Doherty who calmly side footed home.
It should have been three before the break, with Doherty and Kamal De Borg missing good chances, and Jardim had the ball in the net but was flagged offside.

Borough again went close at the start of the second half, as Madeimlo and Doherty both had efforts narrowly deflected wide. There was also a notable increase in work rate and intensity, presumably from half time instructions to kill the game off, as our midfield won the ball back quickly on numerus occasions after losing possession.

Jardim again went close as his 25 yard effort was fumbled onto the post, but a grateful Westfield keeper gathered the rebound. However, he was finally able to double his tally moments later. After some neat passing around the right side of the Westfield area, the ball was played into Jardim, who turned and hit a right footer into the bottom left corner.

With the game now safe, manager Godfrey Torto again took the opportunity to give his substitutes some game time, with all four coming on in the last fifteen minutes. One of them, Giseldi Marashi, was cleverly beaten by Joshua Wallace inside the Harrow area, who slid the ball under Lovre Dražić - largely a spectator for eighty minutes - to make it 3-1.

Another substitute, Max Errington, was full of energy and did his chances of more minutes no harm as he set up two goals from the right hand side. Madeimlo, who more than deserved his goal for his skill and work rate throughout, made it four before Hicham Bouchareb, also on as a sub, cleverly flicked in Errington’s cross to complete the scoring.

After drawing with Aylesbury earlier in the week, Chalfont did Harrow another huge favour by beating them 4-1 in the return fixture. With Uxbridge’s game against Farnham postponed, Borough now lead Aylesbury on goal difference, with Uxbridge a point behind – with all having two games to play. Please see https://bit.ly/3jMbUgj for the full table.

Our youngsters will know that two wins, at home to Cove next week followed by a trip to the Chilterns on Saturday 30th April, will win them the title in their first season.