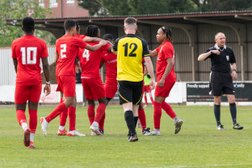 Another dominant home performance moved our Under 23s to within touching distance of the Suburban League Central Division title.

Manager Godfrey Torto started with the same eleven who started against Westfield last week and Borough took an early lead when Rueben Doherty’s inviting right wing cross was met by Leandro Jardim, who volleyed home from inside the six yard box.

Harrow peppered Cove’s goal with a number of attempts without really troubling their keeper and were unable to add to their lead before half time.

Harrow doubled their lead with what looked like a training ground set piece routine. Richie Mbele’s low free kick from the left found Jardim’s near post run and he cleverly flicked past the Cove keeper with the outside of his right foot.

Two became three when Kamal De Borg rolled a pass to Mbele, who took a touch before firing into the bottom left hand corner from 25 yards despite the Cove keeper getting finger tips to it.

De Borg completed the scoring after a Cove defender allowed a clearance to bounce and then followed it with a poor header. The midfielder capitalised by stealing the ball and dribbled into the area before calmly side footing home.

The win means we remain a point clear of Uxbridge, who won 3-0, with both teams having one game to play. We are away to Aylesbury next Saturday, who are three points behind and play their game in hand on Tuesday. Regardless of what happens elsewhere, a win in the Chilterns will mean our youngsters win the title in their first season.