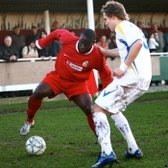 A brace from the recently-returned Victor Asombang, and a wonder save in stoppage-time by keeper Josh Lennie, earned Borough three important points at Earlsmead at Saturday, on an afternoon when none of the 10 teams above them in the Ryman Premier table managed to win.

Asombang started for the first time since re-signing from Staines, while there was a debut at right-back for the towering Daniel Brown, signed from Chesham United. Nick Burton was fit enough to return in central defence, so skipper Wayne Walters again filled in at left-back. For the first time for many weeks, Gary Meakin was able to begin in a midfield berth instead of acting as an emergency defender. Two of last week’s midfield heroes from Billericay, Kwasi Frempong and James Fraser, had today to be content with seats on the bench.

After 20 minutes of uneventful sparring, Mitten in the visiting goal saved a header from his own player, Saunders, and then turned round a header from Asombang. But it was the men from the Kent coast who opened the scoring after 25 minutes. Lennie’s punch from a right wing cross lacked any distance and, worse still, went straight to the unmarked Glyde, who guided the ball into the unguarded net.

Borough hit back to equalise two minutes later. Jonathan Constant’s corner was met by a powerful header from Burton, and Asombang, at the far post, stretched out a foot and spun the ball into the goal.

James Bent headed on for Constant to hit a sharp volley that Mitten saved. Burton then headed wide from another Constant corner. Folkestone’s Friend made a fine tackle on Bent after Daniel McGonigle’s clever pass and Asombang’s lay-off. McGonigle then fizzed a low shot wide after another corner was half-cleared. Late in the half, Saunders headed wide for Invicta.

Early in the second half, Brown nodded on a long throw, Asombang turned sharply but was blocked by the Folkestone defence. But after 57 minutes, Brown’s pass forward was redirected by a super McGonigle pass inside the full-back, and Asombang calmly beat a defender, checked, and stroked the ball past Mitten.

Glyde’s shot deflected off a Harrow defender, and McGonigle headed off the line from the resulting corner. Corbett’s shot was then saved by Lennie after Danny Leech was caught in possession. Constant then got to the right-hand by-line for Harrow, his cut-back to Bent being blocked by the Folkestone defence. Burton’s powerful header from the resulting corner flew over the bar.

A great cross from the left by Bent was well dealt with by the Folkestone defence, and a fine tackle by one of them stopped Constant who had beaten two of his colleagues. As Harrow came under more pressure, Lennie made two fine punches and turned Friend’s header round the post. Watson’s curling free-kick went round the wall but into the side-netting. Four minutes into stoppage time, with Folkestone keeper Mitten up for a corner and causing confusion in the home defence, Lennie dived full-length to his left to keep out a certain goal, and ensure an important win.