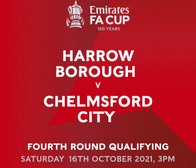 James Ewington’s hat-trick was the crowning glory of a stunning second-half comeback from Harrow that saw them overcome Conference South opponents and progress to the First Round Proper for the fifth time in the club’s history,

and the first time since their trip to Northampton Town in 2016.  All eyes will now be on tomorrow’s draw, live on ITV at 1:15 pm, when Borough will be Ball No.70.

Shaun Preddie passed a pre-match fitness test, so returned to central defence alongside James Mansfield.  Imran Uche moved forward to midfield, where he was to have a truly outstanding afternoon, topped off by scoring the final goal.  Lewis Cole was the unlucky member of the side that beat Beaconsfield on Tuesday to drop to the bench.

Harrow began the game at a cracking pace, with five attempts on goal in the opening minutes.  George Moore cut in from the right to fire a low shot that deflected off James and was saved by Marsden.  A dangerous Michael Bryan cross was headed away by Dickens, Uche’s fierce shot was charged down, Bryan shot over from Leo Donnellan’s feed, and Oluwo did well to cut off a dangerous ball heading for Ewington.  The Clarets’ first attack ended with Blackwell’s angled shot from the right, saved low down by Josh Strizovic.  Mansfield made a fine challenge to stop Sheringham as he moved onto Dada’s pass.  Samuel Adenola then crossed deep to the far post for Ewington to control but fire back across the goal, wide of the target.  But his radar was tuned in after 35 minutes as Bryan drew defenders towards him with a jinking run on the left, playing the ball back to James Taylor whose deep cross to the far post was volleyed home first time by Ewington.

However, the goal had the effect of sparking Chelmsford into life and within six minutes it was they who were in front.  First, in the 39th minute, Norton made a dangerous burst on the left, past a couple of challenges, and drove the ball low across the six-yard box where Sheringham applied a neat finish.  And two minutes later, an inswinging corner caused havoc in the home goalmouth, the ball was not cleared and James hammered it home.

Harrow survived the closing minutes of the half: if Chelmsford had added a third, as they threatened to, things might have turned out very differently.  But they regrouped at the interval and the early part of the second period saw chances at each end.  Taylor glanced Donnellan’s free-kick across the goal, Mansfield made a fine tackle to stop Blackwell, Uche’s drive from Bryan’s pass was blocked, with Taylor stopping Blackwell at the other end.  Sheringham cut in from the right to force a save from Strizovic with a low shot, and Moore charged forward in the inside-right channel to fire a low shot that Marsden threatened to fumble, but clung on to.

In the 62nd minute, Bryan made another mazy run on the left, and his cross hit James on the arm.  It may have been ‘ball to hand’ rather than ‘hand to ball’ but in these days of unnatural arm positions being a determining factor, referee Mr Martin immediately pointed to the spot.  Calmly, after a delay, Ewington sent Marsden the wrong way with the penalty.

Taylor made a great block as Chelmsford again tried to respond immediately to a Harrow goal, but three minutes later it was Harrow who re-took the lead with a bizarre goal.  Ewington chased after Taylor’s long ball downfield but Marsden was the favourite to head it clear as he came out of his penalty area.  However, he misjudged the bounce, the ball went over his head, and Ewington went past him to control the ball and guide it in, completing his second hat-trick of the campaign and take his FA Cup goal tally to seven in four ties.

Strizovic saved well at Jackson’s feet, and Dickens headed across goal, but Harrow were now dominating and Kunle Otudeko came on to play a magical cameo.  He had a shot blocked, as did Ewington, but in the 76th minute he ran from right to left across the front of the penalty area, feeding Moore out on the right.  Moore cut in and hit a powerful right-foot shot that Marsden batted away, but straight to Uche, ten yards out, and he blasted it in to incite euphoric celebrations.  Strizovic saved a Sheringham header that was in any case going wide, and Cole made a fine block tackle, but Harrow saw out five added minutes in comfort to cue more celebration on the final whistle.

Regardless of who comes out of the ‘hat’ tomorrow, Harrow now have some important league games to focus on, starting this Tuesday evening with a short trip north to play Kings Langley.