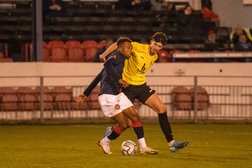 It was all a bit too ‘after the Lord Mayor’s Show’ as Harrow landed back to earth with a big bump after their trip to the heavens at Fratton Park on Saturday.

Well in the game against their Conference South opponents as half-time drew near, two home goals in quick succession then took all the wind from the Harrow sails and the second period became a damage-limitation exercise, in a feisty game that was very poorly-refereed.

Steve Baker used the game to give game-time to Ahmet Biler and Ben Tricker as they make their ways back from their injuries, and there were also starts for Dernell Wynter and Kunle Otudeko.  Turning out for a strong Hampton line-up was Imran Uche: no doubt home boss Gary McCann had been very impressed by reports of his performances at Harrow and, after seeing his display in this 90 minutes, it’s a likely probability that Harrow supporters may have been waving him goodbye when he left the field at Fratton Park.

Harrow were first to show on a mild, still evening near the Thames, with George Moore cutting in from the left and hitting a right-foot shot past the near post.  Gondoh then performed a mirror-image for the hosts, coming in from the right and shooting wide with his left peg.  Michael Bryan found Wynter who was blocked out as he shaped to shoot, and Wynter then twisted past two opponents and hit a decent strike that Forster saved.  Hampton broke the deadlock in the 29th minute.  Lewis Cole was dispossessed and the ball was played through a square-looking Harrow rearguard to Gondoh, who ran on to poke the ball past Josh Strizovic and in off the far post.

Uche’s foul on Wynter might have brought a booking from a stronger referee, and that was to be significant later.  The home wall blocked Moore’s fierce strike from the ensuing free-kick.  Uche then showed his strength with a mighty challenge to stop the breaking Lewis Cole.  Samuel Adenola made a good block from Slew’s shot but The Beavers doubled their lead in the 40th minute.  The referee saw nothing wrong with a challenge on Biler that looked a foul, and Uche burst forward to hit one of his trademark drives, a 20-yard hammer-blow that gave no chance to Strizovic.  In respect to Harrow, the tall midfielder waved away his team-mates wanting to celebrate his goal.

Worse followed.  Harrow were wide open on the left as Miller-Rodney broke into the box but fired over, and Tricker made a saving challenge to stop Slew, but in the 44th minute Uche played in Gondoh on the right and his low cross was turned in at the far post by Leo Donnellan for an unfortunate own goal.

James Taylor made a saving block to a Muir shot as Hampton threatened a fourth, before the half-time whistle rescued Harrow from what was becoming a pummelling.  The second half was never going to be more than a damage limitation exercise but it only took Hampton nine minutes to add a fourth.  Miller-Rodney had already gone close with a shot but, with Harrow appealing in vain for offside, he got clear on the right and finished with a low shot.  Harrow pulled one back in the 59th minute with rather a bizarre goal.  Alfie Cain, newly on, took a corner that he himself would admit was a shocker.  It bounced once before it even got to the six-yard box, but it went past one defender, and hit another, McKnight, on the head to divert past Forster for the game’s second own goal.

Farrell’s free-kick deflected off the Harrow wall and flew just wide, before the game descended.  Referee Mr Burton had mistakenly allowed a number of challenges to pass that another official would have acted on, and players of both sides took that as a green light to up the ante.  Uche took out Donnellan with a bad tackle that ought to have earned him a second yellow, but was of course merely his first.  Cain, Anthony O’Connor and Tricker followed him into the book, together with his team-mates Muir and Deadfield, in the closing 25 minutes of the game, and at one point proceedings ground to a halt while the players indulged in some ‘handbags’, paused, and then resumed their pushing and shoving.  Mr Burton looked on, blowing his whistle without the tiniest bit of notice being taken of it.

Hampton went close to a fifth, with Hagan hitting the post, Deadfield denied by a Strizovic save, Donaldson heading over from a corner and Daniel firing over the bar.

It’s more cup action for Harrow this coming Saturday, and a far more important game at that, as they travel eastwards to Leiston for a Buildbase FA Trophy Third Qualifying Round tie.