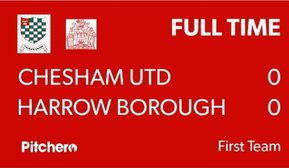 Game 29 this season and finally… a draw!

It was generally a gritty rearguard action from Harrow, capped by brilliant goalkeeping from Josh Strizovic and with a bit of luck thrown in, that enabled them to return from in-form Chesham with an important point.

With many games across the south of England postponed, the pitch at The Meadow was in excellent condition, a slick surface suiting the passing game employed by both sides. It was peculiar, however, that the referee didn’t decide to do anything until half-time about illegal pitch markings in the penalty areas at both ends. It’s an interesting one as far as the Laws are concerned: if home keeper Beasant had made the marks during the game, he would have been cautioned, but they were already there, painted on the pitch! Beasant’s comments that it must have been ground sharers Aylesbury who had done this drew an amused incredulity from the Borough supporters: Mr Beasant has been listening to too many Downing Street Christmas party denials methinks! Mr Norton spoke to both managers before the second half started, presumably getting their agreement that the game should continue.

Early exchanges were even, with Clayton’s curling free-kick held by Strizovic and Taylor glancing an Otudeko corner narrowly over the bar. A neat Harrow move saw Samuel Adenola send George Moore on a run up the right. He exchanged passes with Otudeko before shooting across goal. Strizovic saved Kasinga’s far post header and then kept out Joseph’s angled left-foot strike.

Play continued to be end-to-end with Strizovic saving another Clayton free-kick and Gibbons’s shot from the edge of the box, before James Ewington’s hard work enabled Taylor to cross deep to the far post, where Moore rose above former colleague Chinua Cole to head wide. Moore then had had a vicious goalbound drive from the edge of the box bravely blocked by Ferreira De Paiva. Tricker, Adenola and Ewington combined for a cross that was just beyond a stretching Wynter, Joseph shot across goal for The Generals, and Otudeko had a shot blocked as a fairly even first half ended.

It was not to be an even second period, however! Within 15 seconds Strizovic had to race from his goal to block-tackle a home forward, the ball rebounding to a colleague who lifted it over the bar. Preddie then got in the way of Clayton’s shot. Wynter sent in Ewington for a first-time shot that went too high, before Chesham were back on the attack again. Clayton had the ball in the net after a poor clearance by Adenola, but the assistant’s flag was raised. Murphy then headed over at the far post from a corner. Clayton, the game’s outstanding player, then cut in from the right and hit a left-foot shot that crashed off the post. Clayton again created a chance, Kouassi’s header kept out by a great Strizovic save, with Casey’s header from the resulting corner striking the woodwork. Borough were living on their luck at this point and Baker made a triple substitution to try to stem the tide. Moore did so briefly with a dazzling run past three defenders before shooting narrowly wide, but the Chesham attacks resumed with Harrow seemingly unable to retain possession. Strizovic saved bravely at the feet of Kouassi, came out quickly to hack clear after Tricker had lost possession, and in the dying seconds made a magnificent full-length save low to his left. If the much-loved loanee keeper had been guilty of an ‘off day’ in Dorset on Saturday, he had more than made up for it here.

Saturday sees an immediate reverse fixture as Chesham come to The Rogers Family Stadium. Play like they did in the second half here, for all their defensive determination, Harrow won’t be so lucky a second time. In particular a plan has to be drawn up to stop Clayton’s major influence on proceedings.