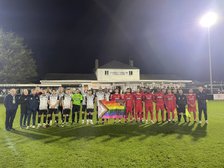 Those who decided that live football in Perivale was better than watching France v Australia on TV were handsomely rewarded, with a pulsating cup tie at The Powerday Stadium.

Attacking was in vogue, defending not quite so, as Harrow got five of the eight scored on the night to march into the next round.

Strizovic was in immediate action as he was forced into a full-length save to keep out Allotey’s shot. Allotey then put a Biler cross wide at the far post, but made amends in the 10th minute with a debut goal, latching onto Billy Leonard’s pass and cutting in from the right. Strizovic got in the way of his shot, but it spun up and back off his body and into the goal.

Hanwell hit back with Waters sending a near-post header across the goal, and they equalised in the 14th minute when Sean Moore was unmarked as he powered home a far-post header from a deep right-wing cross.

Strizovic saved from Kai Omoko Brosnan, and Leonard fizzed a shot just past the near post, as Harrow sought to retake the lead, but as the half wore on their attacking faded and Hanwell began to take control. Charlie Taylor saved a low shot from Carr and then kept out Lynch’s strike. A poor Borough clearance was collected by Miskin, and he shot across goal.

George Moore and Great Evans were introduced at the break and, although the changes were to be decisive, they weren’t so immediately. Carr shot just wide and it took a fine Kandolo tackle to stop Sean Moore. At the other end, Leonard fired over and Ezra Ikebuasi was inches away from connecting with a Leonard free-kick. The London Geordies went ahead in the 55th minute when Lynch found space inside the Borough box and sent a shot across Taylor into the far corner.

Sharman found himself in unusual territory, charging into the Hanwell box. His shot was parried by Strizovic and then cleared. Baker made two more substitutions (five being allowed in the County Cup), Keegan Bloom and another debutant, Nebay Haile, coming on, and a few minutes later a flowing move ended in a neat interchange between Evans and Biler, the ball then worked left to George Moore, who hit a shot that dipped very late to go over Strizovic and in.

It was to be the first of five goals in twelve minutes! Harrow were only level for two of them, as Carr, who’d threatened all night, was once again allowed to power through on the right to hammer home a shot. Montel Brown was the fifth Harrow substitute, and he’d only been on the field for two minutes when, in the 75th minute, he played in George Moore whose low, hard drive was too much for Strizovic to keep out. And two minutes later, Borough were back in front as Leonard played a lovely through-ball to Evans, who ran on in the inside-right channel to slot the ball past the advancing Strizovic.

A Moore-Leonard move led to a blocked Evans shot and then, in the 80th minute, Harrow gave themselves a two-goal cushion, Brown bringing down Leonard’s right-wing cross, swivelling, and hammering a shot into the roof of the net.

Leonard’s shot from Evans’s pass went narrowly wide, before Taylor made a great save with his feet to keep out Laaref. Even two-up, Harrow’s supporters were uncertain of the win, all-the-more-so when, with 90 minutes just up, Biler felled Adom, who got up to take the penalty himself, but Taylor made a great save, diving to his right to keep out the spot-kick: he is proving to be a very able No.2 keeper. Olunfemi and Lynch both shot over with late Hanwell efforts before the whistle blew to confirm Harrow’s passage into the Quarter-Finals.

Harrow return to league action this Saturday with a visit to The Rogers Family Stadium from Salisbury. Advanced discounted tickets can be purchased on our ticketing page https://harrowboroughfc.ktckts.com/