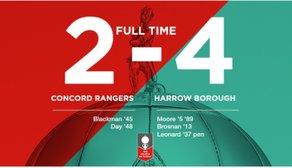 Boro reached the third round of the FA Trophy for the first time in 22 years, in an emphatic display against Concord Rangers at their Aspect Arena.

The Beach Boys were forced on to the back foot right from the kick off. Boro had already threatened the home goal before George Moore forced a mistake out of Aron Pollock before taking a couple of touches then dispatching a shot past Josh Tuansaam to give Boro the lead.

Only seven minutes later the Boro made it two. George Moore hit a shot across the goal that Tuansaam could only parry, Montel Brown almost converted it, but Kai Brosnan thumped it home from close range at the far post.

In the 37th minute Billy Leonard’s pass found Montel Brown inside the area, as he was about to control the ball he was felled by Ryan Blackman. The referee had no hesitation in awarding the penalty and received no protests either. Billy Leonard calmly sent Tuansaam the wrong way to put Boro 3-0 up.

In first half stoppage time The Beach Boys had a lifeline. A free kick was awarded on the edge of the Boro area and Ryan Blackman whipped the ball over the wall and beyond Jacob Knightbridge.

Three minutes into the second half it really was “game on”, as Concord scored a second goal. Blackman delivered a free kick to the far post where Harrison Day met it with a clean header, to score a debut goal.

Concord had a spell of dominating the possession but failed to trouble the Boro defence, and in the final quarter of an hour Boro had the best chances. George Moore put Isiah Noel Williams in on goal but his shot hit the outside of the near post. Then from a very similar position Noel Williams hit a shot that went agonisingly past the far post.

But Boro finally got the fourth goal to clinch a fantastic win when Moore took the ball to a tight angle then hit a powerful cross/shot that the keeper could only help into the back of the net.

All eyes are now on the 3rd round draw that is being made on Tuesday lunchtime which will include all National League clubs.

Our next fixture is on Tuesday evening, when the rearranged Middlesex Senior Cup tie at Hanwell Town will take place, kick off 7.45pm