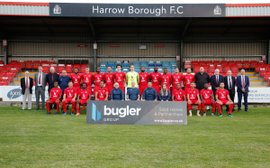 Did this side really draw at Margate? Harrow followed their heroics on the Kent coast with another home performance from the ‘truly abysmal’ manual,

which is getting an awful lot of use this season. They seemed to be lacking motivation as their visitors from Kent passed the ball round at will, won most of the chases, most of the challenges, scored an early goal and had very little difficulty keeping their lead, Hadler in their goal not being called on to make a save in the whole game.

Anthony Maissiat was ill, so Michael Bryan came in to an otherwise unchanged side from the draw at Hartsdown Park. This meant that Harrow lined up with a back-four instead of the 3-5-2 formation that was used at Margate. They were struggling from the start as Tonbridge, a side that hadn’t scored in their last three games, zipped the ball around with their nippy forwards troubling the Harrow back line. Okojie was closed out in an early raid, before Nick Jupp pulled off a stupendous one-handed diving save to keep out the same player’s flicked header from Folkes’s cross. The Harrow defence were allowing far too many crosses and in the 13th minute, Tonbridge raided on the left, and Greenidge had time to control the ensuing cross and hammer it past Jupp.

Carey lobbed over the bar before the game was held up for seven minutes by a nasty-looking injury to Brivio, the visiting defender stretchered off. Hopes that Borough might regroup during this break were very short-lived, and it took three defenders to stop Greenidge. Tonbridge were totally in charge, but a few minutes before half-time, out of the blue, Harrow suddenly had a golden chance to equalise, when Bryan got to the right-hand by-line and squared the ball. Marc Charles-Smith arrived in the six-yard box in the centre of the goal, but the ball screwed off his outstretched foot and went wide of the target. Carl McCluskey spurned another opportunity just before the break, when he took advantage of some hesitation between Hadler and Ball, won the ball, but then bizarrely returned it straight to the keeper.

Michael Peacock limped off at half-time to be replaced by John Sonuga. The boil had not been lanced in the home dressing-room, as immediately a dreadful free-kick by Howard Hall led to a Tonbridge break, Julian Smith’s challenge stopping Okojie. Harrow did, however, start to win a few challenges and at last put a good move together, Sekou Kaba picking out Bryan, his cross met by a first-time Nik Salapatas shot that was blocked by a defender. Another neat move broke down when Carl McCluskey miscontrolled the ball on the edge of the box. Charles-Smith headed over from a Smith cross. But the golden chance of the second half went to the visitors, Whitnell breaking clear from Sonuga to drive a cross that seemed to go right along the Harrow goal-line without getting a touch.