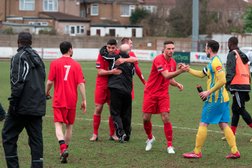 A huge week for Harrow began with three huge points, Borough lifting themselves right into the midst of an intensifying battle

at the foot of the Ryman Premier table when David Taylor fired home the only goal of the game with 11 minutes remaining.

There was a double dose of good news before the game for home fans. Lewis Driver had left the Leiston ground on crutches last Saturday, but fears of a break had been unfounded and he had passed a pre-match fitness test. And Spencer McCall was back, following release by Bishop’s Stortford. Taylor was the man from the Leiston starting line-up who dropped to the bench to accommodate him.

Harrow began at pace, with Brown in the visiting goal making a magnificent full-stretch save to turn away Driver’s rising 20-yard drive. A neat move between Driver, McCall and Ryan Hope then gave Marc Charles-Smith a sight of goal, but the Gulls’ defence snuffed out the opening. Driver was again at his hard-working best, and he charged down Brown’s clearance only to see the ball run out for a goal-kick. He then picked up the ball on the right and tried his luck from a narrow angle, Brown turning the ball round the post. McCall’s excellent pass with the outside of his foot sent Charles-Smith through in the inside left channel, but his shot screwed off the outside of his left foot, past the near post.

But it was then Canvey’s turn to dominate, the visitors looking especially dangerous down the left flank. Sykes stepped over one cross giving Showunmi a clear sight of goal, but he steered his shot past the post. Easterford rattled the bar from a corner, but referee Avent had seen a foul in his jump. Another left-wing move saw the ball played across to Collis. The Gulls’ right back may have been carrying a few extra pounds, but he was a lovely striker of the ball and his shot fizzed across the goal. Sykes forced a save from Nick Jupp with a shot on the turn and then hit another shot across goal. Harrow forays were becoming rarer but when Driver headed the ball on, Charles-Smith’s shooting let him down again, the Borough skipper miscuing his shot across the goal.

Canvey also began the second half well, but found Michael Peacock and Anthony Page forming a strong barrier in front of Jupp, with Josh Webb and George McCluskey supporting them well. Peacock was once again proving to be a particular hero, having taken a nasty-looking blow to his knee in the first half but battling through it in typical fashion.

Harrow settled and went close when Hope played a clever short corner routine with Kamaron English, cutting in to the box for a shot that was blocked. Driver drew a save from Brown with another effort. A poor Jupp throw led to a Canvey opening, foiled by a fine Webb block tackle. Charles-Smith had left his shooting boots at home as, for the third time in the game, he mishit a shot after Driver had flicked on Peacock’s long ball forward.

After 72 minutes, Taylor replaced Michael Bryan, who had not had one of his more productive afternoons. And after just seven minutes on the pitch, he became the day’s hero. Charles-Smith began the move with a long run from right to left into the Canvey half, playing the ball left to English. The Gulls’ defence initially dispossessed the Harrow winger, but the ball came back to him and he got into the penalty area on the left. As he did so, he stumbled and fell, but the ball popped out across to Taylor, who was perfectly positioned to drive it in from ten yards out.

Another Harrow substitute, Ben Long, saw a fierce drive parried away by Brown, but at the other end it was Jupp who showed his quality when Sykes chested the ball down to Showunmi, the Borough keeper diving to his right to save. Man-of-the-match Driver lashed a late opportunity wide before referee Avent, who controlled a potentially difficult fixture well (given that three red cards were dished out in the game at Park Lane earlier this season), blew for time cueing home celebrations.

Harrow now have to maintain their intensity as they face two of their fellow battlers against the drop: VCD Athletic at Earlsmead on Tuesday; and AFC Hornchurch at Bridge Avenue next Saturday.