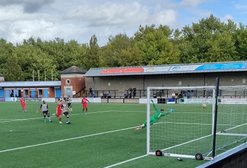 For 80 minutes Boro played some of their best football of the season, dominating the game with some delightful attacking football. Only for a crazy few moments to cost them all three points as they returned from Dorset empty handed.

Steve Baker was able to field an unchanged starting X1, but as early as the 8th minute he was forced to make a change as Shaun Preddie went down with an injury and had to be replaced. Jaden Sharman came on, so Boro had to play with only one recognised centre back.

Boro took the game to their hosts. In the 10th minute Ewington got behind the home defence and delivered a low cross that was cleared just in time, before the in rushing Noel-Williams & Brosnan got to it.

A rare Dorchester attack was then stopped by Noel-Williams helping out in the left back area. The referee deemed it to be a free kick and even more surprisingly a booking. The free kick went right across the face of the goal & wide.

That was almost the only break in Boro attacks during the opening 25 minutes. Kai Omoko Brosnan beat two defenders then drilled a low shot which was well saved by Harrison in the home goal. Then Isiah Noel-Williams fed a ball in to the inside left channel for Ewington, who took a couple of touches then whipped a terrific cross that was smashed home by Brosnan at the far post.

The action continued to be at only one end of the field, as Ewington thumped the ball home for what he thought was Boro’s second goal, only for the celebrations to be halted by the assistant referee flagging for offside.

Brosnan skipped down the right wing then delivered the ball to Ewington’s feet his shot almost beat Harrison, but he somehow got a foot to the ball to keep it out.

Boro were now getting more & more players forward and when Biler tried a long range effort the ball was cleared & punted forward, Olaf Koszela lead the chase and got to the ball before the onrushing Jacob Knightbridge, then steered it into the empty net to equalise.

Noel-Williams was having a terrific game in midfield, and late in the half he beat his man running down the right hand side of the area, before being hauled back. A free kick was awarded, but no booking, which infuriated the Boro players, considering that earlier Noel Williams had been booked for what they considered a lesser offence. The free kick found Ewington, but he was crowded out before he could shoot.

Dorchester had the first chance of the second half a long ball reached Koszela but Knightbridge reacted quickest to push it out for a corner.
From that corner Boro counter attacked to win a corner of their own. The ball was cleared, then Joseph Lawal delivered the ball for Isiah Noel-Williams to meet on the volley that was matched by a fine save by Harrison only for the ball to fly back to Noel-Williams to volley home.

The home side won a corner on 75 minutes that was sent very deep to be met with a thumping header from captain Callum Buckley, which was saved at full stretch by Knightbridge.

In the next two minutes the whole afternoon of excellent football was wasted, as first on 81 minutes Dorchester were awarded a penalty when Jaden Sharman was adjudged to have been the aggressor in a challenge for the ball. Alfie Stanley dispatched the spot kick. Then straight from the kick off Boro lost possession, they claimed an infringement, but substitute Shaquille Gwengwe ran through unopposed to score and give the home side the lead.

Boro went all out to find a third goal, but their best effort was a Sharman shot across the goal.

Boro supporters can take heart from the quality of the football, but the manner in which the goals were conceded will be of concern

On Tuesday, Harrow welcome Cockfosters to Earlsmead for a London Senior Cup tie.

Photo courtesy of Gary Holderness, (Ewington nets but is flagged off side)