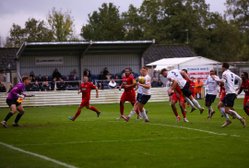 Borough returned to Middlesex wondering how they hadn’t won this game, but even more relieved that they hadn’t lost it.

Exciting for the neutrals, exasperating for the followers of either side, the two clubs with the worst defensive records in the Premier South demonstrated exactly why on an afternoon of roller-coaster defensive calamity in South Gloucestershire.

‘Don’t change a winning side’ is an old football cliché, but Steve Baker chose to do so here, and might later have wondered if he was right to do so. Ezra Ikebuasi had returned to the club during the week and he came straight into the side in place of Keegan Bloom. But Ezra wasn’t to play at right-back: he went into a holding midfield role with Samuel Adenola returning to his usual right-back role.

Whether it was those changes, or a home side fired up for their first game under a new manager, or something else, who can tell, but Harrow were truly woeful for the first 35 minutes. Passes went astray repeatedly, there was no midfield cohesion, pressing was inconsistent, and the Harrow defence was under constant pressure. Drew was allowed room to turn and fire an early effort that was saved by Jacob Knightbridge, and when Adenola gave away a needless free-kick, it gave another opportunity to Drew, a full-length diving save by Knightbridge stopping an opening goal. George Moore’s fierce cross went just in front of Montel Brown, but the Bluebells threatened again when Shaun Preddie and Jaden Sharman miscommunicated and Drew was in on goal, firing over this time. Sharman then gave the ball away to McLean who shot across goal.

At last Harrow had a decent effort when Moore’s clever free-kick released Billy Leonard on the right, and his driven cross produced a good diving save from Horsell. But the home attacks resumed again and a poor Knightbridge clearance led to Ibrahim cutting inside, Knightbridge pushing away his shot. Moore had an effort land on the roof of the net but Yate got the goal they deserved in the 28th minute, a deep corner from the left met by a looping header from Mitchell, which Knightbridge flapped at but failed to divert it. It may well have been going in anyway but Toby Raison was given the credit for touching it over the line.

The goal gave Yate even more spark and a lovely move ended with an Ibrahim drive, Knightbridge making amends for any fault with the goal with a marvellous full-length save. The resulting corner saw Stanley given a free header at the far post, but he put it over. But after 36 minutes, out of the blue, Harrow levelled. A good move ended with Adenola playing in Moore in the inside-right channel. His shot lacked venom, but Horsell spilled it, and Montel Brown was on hand to convert.

The belief drained, almost visibly, from Yate, and Harrow had a great spell up to the interval. Horsell turned round Kai Omoko Brosnan’s left-footer, Soady nearly put Leonard’s corner into his own goal, and a long Knightbridge clearance sent Moore away, and his driven right-foot cross-shot flew across the goal. A magnificent Brosnan run from his own half ended with a right-foot shot that drew a full-length save from Horsell. The resulting corner, in the 42nd minute, was half cleared, but Brosnan picked up the ball on the right-hand by-line, and he spotted Moore free on the left hand edge of the area. His pass was perfect, and Moore controlled the ball and then curled a lovely right-foot shot into the top corner to give Borough a half time lead.

So, would Harrow continue this control into the second half and go on to win the game? No. The new Yate manager had clearly fired up the Bluebells at the break. Adenola forced Ibrahim to go wide and shoot off-target, but in the 55th minute Jack Stanley arrived unmarked at the far post to head home Drew’s deep free-kick.

McLean was close to putting Yate in front with a rifled shot inches over from the edge of the box, but Harrow were looking terribly shaky, and in the 59th minute, a dreadful clearance from Adenola punted the ball from close to the right-hand by-line to the centre edge of the penalty area. Tyler Ashmead picked it up, held off Sharman, and drove it past Knightbridge.

Baker made a double change, with Great Evans and James Ewington replacing Brown and Ikebuasi, and the switches had an immediate dividend with a 67th minute equaliser, as Evans laid Isiah Noel-Williams’s ball back to Leonard, whose 25-yard drive took a wicked deflection past Horsell.

This time, though, the Harrow goal didn’t puncture Yate’s confidence. Knightbridge tipped over Lewis’s shot, and then palmed over another effort after a corner was cleared off the line. Harrow retaliated, Horsell making a good save to hold on to Moore’s deflected free-kick with Ewington waiting to pounce. A Brosnan run set up Moore, whose sharp turn brought a left foot shot narrowly wide. Knightbidge made a good save with his feet, and an important late flying tip-away of a cross, as the game ended all-square.

Harrow now have a free midweek before a visit next Saturday from a Poole Town side currently occupying one of the play-off spots.