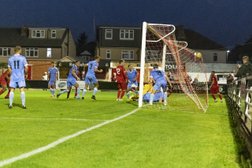 Just as it looked as if incessant Poole second-half pressure was going to be rounded off by a stoppage-time goal, Harrow grabbed the winner at the other end, in the final minute of added time after a very exciting game.

Shortly before the game, Borough boss Steve Baker was handed a selection headache, as a playground accident to his daughter meant the withdrawal of skipper Shaun Preddie. Samuel Adenola and Ezra Ikebuasi therefore lined up as centre-backs with the daunting prospect of facing last season’s league top scorer Tony Lee. Keegan Bloom returned to the starting line-up in the right back berth and Billy Leonard took the captain’s armband for the first time.

Harrow made a lively start and Montel Brown really should have put them ahead in the opening minutes, side-footing straight at Poole keeper Butler, who also saved Kai Omoko Brosnan’s follow-up. Jacob Knightbridge was also in early action, turning round Dickson’s shot, though he would have been relieved when Lee headed over from the resulting corner. An even contest saw more action at each end, George Moore’s shot saved by Butler, Fogden shooting across goal for Poole, and Olumuyiwa stopping Brosnan with a wonderful challenge when the youngster was through on goal. Lee fired over after Adenola’s clearance was charged down, and when Knightbridge saved Fogden’s shot, Isiah Noel-Williams was on hand to block a follow-up effort. Knightbridge made another save from Fogden but the Poole forward really shouldn’t have allowed him the chance to do so, being given the ball in acres of room. More good defending by Olumuyiwa stopped Brosnan as an even half ended.

Leonard and Brown had efforts blocked and saved as the second half began, Knightbridge then saving Lee’s far post header. The Brosnan-Olumuyiwa battle continued with the Poole defender blocking the Borough forward’s drive. But Poole began to take control, with Pardoe’s shot from the inside-left channel hitting the near post, and a big scramble ensuing after Knightbridge came for a corner but failed to get the ball. Bloom then hooked the ball off the line and Knightbridge made an important punch clear. It looked like the visitors would make the breakthrough but it came at the other end. Jaden Sharman won the ball in midfield and Noel-Williams worked it on to a breaking Brown, who delivered it wide right to Moore. His angled shot was parried by Butler, but a balletic Brown reacted sharply, with his back to goal, to flick the ball home with his heel.

Leonard struck a lovely low 30-yarder narrowly wide, but Poole upped their game in search of the equaliser. Lee headed narrowly wide and when a long throw found its way to Rose, he shot across goal. The Borough defence were in inspired form, but they were finally breached in the 87th minute. A surging run by Luke Holmes appeared to have been stopped by a combination of Ikebuasi and Noel-Williams, but Fogden robbed them of the ball and hit a low drive that seemed to go ‘through’ Knightbridge as it sped into the net.

With five minutes’ added time shown, Poole poured forward looking for a winner, and Rose’s goalbound shot was deflected wide. But in the fifth of those minutes, Moore forced a corner, and with Brosnan having been substituted, Leonard wasn’t able to perform the usual short corner routine with his buddy. Instead the ball was delivered to the far post, where Great Evans won it but saw his header blocked. However, the loose ball bounced back to him, and he controlled it before smashing it in, his fellow substitute James Ewington doing well to get out of the way of it. What a way to win a game!

Harrow now face two ‘on the road’ cup trips: first to Hanwell Town this Tuesday in the Middlesex Senior Cup; and then to Concord Rangers on Saturday in the Isuzu FA Trophy Second Round Proper.