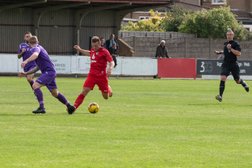 There was stoppage-time controversy as two in-form sides shared the points in an exciting ‘game of two halves’.

After selecting an unchanged side for each of the first four games Steve Baker, probably realising there were players on the bench needing game-time to maintain match sharpness, made three changes. In came George Fenton, Ryan Moss and Lewis Cole, with Josh Andrew, Frank Keita and Kensley Maloney dropping to the bench. The shape was changed too, with Fenton, Shaun Preddie and Adam Pepera operating as a back-three with George Moore and Chinua Cole pushing well forward in the wing-back roles.

The wing-back system has of course be used to great effect by Harrow in the past, but today was not one of those days. Too often Moore and Chinua Cole were left upfield as Taunton used the spaces they’d vacated to effect, with neither Fenton nor Pepera especially comfortable in getting out wide. There was early warning when Short was able to arrive in the box unannounced to shoot wide at the far post, and as the first half developed the Peacocks were able to get more and more joy by getting the ball to the flanks. Lewis Cole made a great tackle to stop Chamberlain, and when Neal was in on goal Preddie and Fenton doubled-up to stop the danger. Wright failed to connect with a very dangerous delivery from Neal, before heading over from a free-kick. Harrow weren’t creating a lot at the other end, with the solid centre-back pairing of Palmer and Grimes, the latter making his debut after a midweek transfer from Tiverton, standing firm against most attacks. An Anthony O’Connor turn and shot, over, and a header wide by the same player from George Moore’s cross, were the only significant threats. Yet another dangerous Taunton cross flew across the Harrow goalmouth before the visitors broke the deadlock in the 39th minute. A clever move developed on the left flank and ended with a deep cross beyond the far post, returned into the area by Grimes for Adelsbury to fire home.

Importantly, Harrow survived the closing minutes of the half and came out for the second period with a new determination, striking back within two minutes of the restart. O’Connor and Lewis Cole were involved on the left before the ball was played to Moore, 20 yards out, and he struck it low and crisply past Irish’s right hand into the net.

Taunton nearly regained the lead immediately, as Neal shot across goal, Hafed Al-Droubi punched away White’s free kick, and Chamberlain curled the ball wide after being teed up by Smith but, just as Taunton had dominated the first half, it was Harrow who did so in the second. Moore sent O’Connor away on the right and his cross was well taken by Irish, before Lewis Cole picked up the ball in the inside left channel and hit a piledriver that thudded off the crossbar. Lewis Cole’s cross was then flicked on by Moss to O’Connor, whose effort was saved by Irish, who reacted superbly to claw away the follow-up. Moore tried his luck from long-range, Irish needing two tries to hold on to it, another Moore shot flew over, and Kunle Otudeko curled a free-kick a tad too high.
Taunton threatened again when Kensley Maloney gave the ball away, Neal running in on goal until Al-Droubi and Jordan Ireland, once again shining as a screen in front of the defence, came to the rescue. Al-Droubi held a dangerous Kite cross, but Borough finished the stronger. Otudeko hit a vicious strike wide from 20 yards, Moore went past Webb to shoot past the near post and then, two minutes into stoppage-time, Moore fed O’Connor who was being dragged back by Grimes on the edge of the box. Although the home striker was in a position to shoot despite being held, referee Mr Ellsmore, excellent until that point, blew up before seeing what developed. As the ‘last man’ Grimes saw a red card, but the resulting Moore free-kick was saved by Irish.

The point meant that Harrow remain one of only two unbeaten sides in the table, sitting sixth, two points off the pace with a game in hand on all five sides above them. They now have a fortnight off from league action, their next game being their entry into the Emirates FA Cup, in which they take on Hellenic League side Binfield next Saturday at the Rogers Family Stadium.