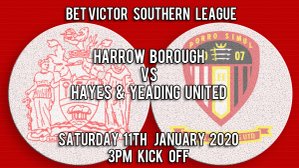 Harrow Borough secured three valuable points against Hayes and Yeading at The Rogers Family Stadium – clinging onto victory right at the death.

Having taken the lead through Michael Bryan, the Reds were pegged back just before half time as Hassan Jalloh equalised for the away side.

Despite conceding a late equaliser, Steve Baker’s side came out with all guns blazing in the second half and two goals within 15 minutes of each other helped Harrow on their way before Jalloh set-up a tense final 10 minutes.

In what was a fiercely competitive game, the home side created the better chances in the first half, the first chance of the game came from Harrow’s left-hand side where Chinua Cole took on two opposition players and fed a delightful cross for George Moore, only to see to his header come to nothing.

With over 30 minutes played, the away side fashioned their first meaningful chance of the game, as a cross from the left evaded everyone, only to find its way to Afolabi Coker whose fierce strike sailed just over Hafed Al-Droubi’s bar.

Just minutes after, Harrow took the lead as Lewis Cole’s dangerous in-swinging corner was not dealt with by Paul Hughes’ side, with the ball managing to land at the feet of Bryan who rifled in home from the edge of the box under an array of bodies.

However, Harrow Borough were creators of their own downfall as Immanuelson Duku chased down a long and hopeful ball, with Harrow captain Shaun Preddie trying to shepherd the ball out of play, but Duku’s managed to squirm the ball from what seemed a lost cause, to find Jalloh in the box to fire home and send both sides level at half-time.

As the rain was starting to settle, Harrow came out of the blocks flying and just two minutes after the restart, found themselves ahead for the second time in the match. This time, Thomas Scott’s inviting cross from the left was played into the corridor of danger and the ball managed to trickle its way past Andrew McCorkell, sending the home fans into ecstasy.

Duku threatened all game and Hayes and Yeading’s pressure nearly paid off as they worked ball well to the wide areas to find Jack Williams who played an inviting ball in as Hayes’ number 9 steered his header just past the post.

With over an hour played, George Moore added a third as another corner kick from Cole caused mayhem in the opposition box, with neither goalkeeper nor defence able to clear their lines and were punished by the Moore who lashed in from three yards out.

As the game was in danger of ending comfortably, Jalloh gave his side a lifeline having worked space for himself on the edge of the box, jinxing his man and arrowing a shot into the top corner past the diving Al-Droubi.

Having been comfortable for the majority of the half, Harrow Borough managed to see out one last attack from the away side, who threw everything at the stubborn home side, to no reward as Harrow Borough secured well-deserved three points.

It’s a victory that saw Harrow close the gap to just four points on Saturday’s rivals and up into 12th. Baker will be hoping his side can keep up their rich gain of form, having achieved 10 points from their last four games as they head into next week’s clash, away at Blackfield & Langley.