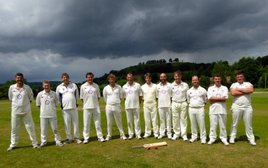 Righto I'll take the bait. On winning the toss, Hartfield proceeded to bat gingerly at a cautious rate, but keeping wickets in hand. I gave out Chris Turner for a caught behind and he went off chuntering. Safe in the knowledge he doesn't use social media I would suggest that as I saw him hit the cover off the ball into the keeper's gloves he is talking... erroneously. However a welcome return from Mike Bristowe saw some elegant striking on his way to 26. Hartfield saw a couple of quicker bowlers, which was a nice change and Fred top scored with an important, if thoroughly uninspiring 44, before trying to moo a spinner towards Cowden, and crucially, missing the ball. Rakesh (24)and Dave Turner(18) came in towards the end and moved the score along to a respectable 144 . As for the bowling, I opened with Rakesh and I wasn't feeling optimistic as Fordcombe's captain struck me as an experienced journeyman who was risk averse and would tuck into a bit of early season filth. I was, thankfully, wrong and Rakesh led the way with 4 cheap wickets. Dave the other kiwi was the real find and polished off the middle order in quick time with some bloody good leg-spin and Fred effected an admittedly impressive run out. Fordcombe were out for about 75 and it was early drinks. Bloody great.
Share via
FacebookTwitter
https://www.pitchero.com/clubs
Recent news