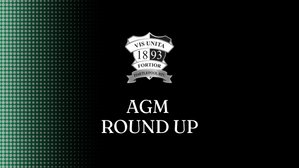 All the main points from Thursday nights Annual General Meeting which was held in The Lindridge Lounge.

Treasurer Lee Dodgson posted a healthy set of accounts which was very encouraging.

Subs Secretary Dave Jones outlined how the membership had increased significantly since the introduction of the new discount cards.

It was proposed and agreed that social membership would increase to £25 for the 2022/23 season with playing membership increasing to £21.

Membership cards will be voided if subs for the new season are not paid by the end of June and this will remain the case until they are paid. Any new members will be issued with a new card.

Director of Rugby Liam Lester reported on a successful season for the clubs senior sides that saw the 1st XV secure promotion to Durham Northumberland 1, Hartlepool A win the CANDY Spoon and contest the County Cup Final, the Friars fulfil seven fixtures and the Academy winning their Colts League Conference.

The Academy had 10 county players this season while hooker Liam Cooper played for the North of England U18, and 15 players made their senior debut for the club.

It was also a breakthrough year for women's rugby with Hartlepool Ladies enjoying a positive campaign which included picking up their first win in their final game of the season. With new players joining all the time numbers continue to grow.

He added his thanks to all of the players, coaches and volunteers for their efforts this year.

He thanked Andy Wray in particular stating that his leadership and management of the 1st XV was key to their success.

Mini & Junior Chairman Stewart Hind commented on the continued growth and success of the section, and informed the meeting that we will have a team at every age group from Under 16 down over next season.

He added that in two years time we are on course to have a team at every single age group.

He was delighted with the addition of three new girls teams which have flourished since the beginning of the year.

In his closing address President Andy Bell spoke of his pride at how the club is operating at present and how we continue to grow and go from strength to strength.

He was delighted at being able to welcome more and more players and parents into the 'Old Boys Family' this season and reserved special praise for our army of volunteers without whom none of it would be possible.

The following club officials were elected:

Dean Ryan, Mark Atkins, Gary Bennison and David Petty were also welcomed on to the General Committee for the upcoming season.