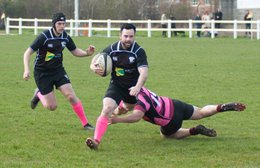 Tomorrow afternoon we will descend upon West Mills en masse with three teams making the trip through to Bishop Auckland.

The first team kick off at 3pm and will be preceded by Hartlepool A and the Friars who get underway at 2pm.

It's all to play for with Pool entering their final league game of the season knowing that a win would secure second place and promotion to Durham Northumberland 1 after a five year absence.

But Bishop Auckland have promotion aspirations of their own and with two games in hand a victory for the hosts could give them the opportunity to leap frog Pool over the coming weeks.

For the visitors, John Osborne is unavailable and Martyn Howard suffered an ankle injury in the recent win against Whitby so Lewis Dawson-Weatherill is recalled and starts at hooker.

The back row has a dynamic look to it with Dean Dickson coming back into the side at number 8 flanked by Aaron Jeffery and Jon Carney.

Tazz Pelser and Adam Ainley will be looking to continue their fruitful half back partnership.

David Chester is unavailable so Harry Mayes, who has impressed since joining the club in the Autumn, partners Keagen Thomas in the centre.

There is a recall for Dylan Thomas who starts on the wing with Jack Wilson providing backs cover from the bench.

Zach Pounder is named among the replacements and could be set to make his first team debut for the club. A tenacious and energetic back rower, the 17 year old has been in fine form for the Academy this season scoring 9 tries and has made an appearance for Durham County U20 against Durham University.

Hartlepool A travel to Bishop Auckland for the third time this season and will be hoping for a reverse in fortunes having lost out to the same opponents at Mayfield Park in their last outing.

The Friars, our Vets team, begin a sequence of two games in a week when they take on Bishop Auckland Vets.