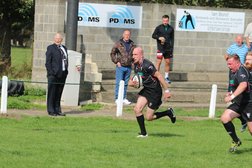 Hartlepool made a return to winning ways thanks to a superb second half performance against Redcar on Saturday.

Redcar started the brighter of the two teams and after 3 minutes added the first try of the afternoon through centre Paul Evans who dummied over to score in the corner. Full back Danny Addison conversion from the touch line was true and the away side led 7-0.

Pool were dealt a blow when centre Tom Lister playing his first game of the same was yellow carded for tackling the Redcar player in 22 metre line whilst trying to take a 22 drop out.

Despite having a man down, Pool started to play in a structure fashion and after 12 minutes , Pool moved up the park and a scrum 10 metres out saw Tom Johnson pick up from the base of the scrum and passed to scrum half Nathan Taylor who accelerate through a gap to score under the post. Anthony Lawrence conversion struck the upright and the lead was reduced to two points. 5-7

From the kick off , Tom Johnson caught the ball and went on a rampaging run beating three players, once he was hauled down , Nathan Taylor fed centre Alex Winter who looked like he was going to score but a superb cover tackle bundled him into touch.

23 minutes on the clock and Pool added a second try, Liam Pape strong determined run saw him make 20 metres and when he was eventually stopped Tom Johnson was on hand to touch down. Anthony Lawrence conversion kick was true. 12-7

5 minutes later, a drive from the line out saw second row Sam Kitching held up on the try line.

With the home team in the driving seat, Pool drove the scrum forward and Tom Johnson picked up and scored from close range. Anthony Lawrence added the extra 2 points. 19-7.

With 4 minutes remaining before the interval Redcar came back into the game with their second try, a quick penalty caught Pool napping and four phases later resulted in prop Cian Briggs crashing over. Addision conversion reduced the deficit to 5 points. 19-14

Pool exerted their authority with a superb finish by Alex Winter, the home team attacked from their own 22 metre line and as the forwards drove on , quick hands in the backs saw centre Alex Winter beat two player to score from 50 metres and score under the posts which saw the bonus point secured . Lawrence kick moved the score to 26-14 at half time.

The home time started the second half in determined fashion and following a great catch by Tom Johnson in the line out , the forwards drove on , Nathan Taylor then fed the backs and when Sam Kitching joined the line, his pass to Alex Winter saw the ex Durham City colt beat the last defender to score in the corner. 31-14.

6 minutes gone and winger Tyler Claydon made yards with a strong run, Liam Pape then joined in the act and caused problems with a direct run, the ball was cleared before Anthony Lawrence threw a dummy to score from 30 metre . He then converted his own try. 38-14

Redcar immediately came back into the game, Pool failed to catch the kick off and Redcar 's second row fly hacked the ball through and as he looked to touch down Tyler Claydon was adjudged to have held the Redcar player back and the way side were awarded a penalty try. 38-21 .

Pool's 7th try was a superb team effort , Tom Johnson and Andy Small combined before the forwards drove on , the ball was then passed through 8 pair of hands before Alex Winter's clever flicked pass saw Nathan Taylor score in the corner for his second try. 43-21 Tom Lister was wide with the conversion.

With Pool in command, second half sub Jim Greensmith exploited a game at the ruck and broke through as he was tackled he had the hindsight to flick the ball to Jon Carney who scored under the posts. Tyler Claydon kick saw Pool rack up 50 points. 50-21.