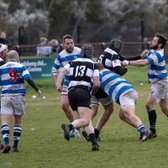 Shields Come Out On Top In Thriller

Hartlepool drop out of the top three following the loss at second placed North Shields on Saturday.

Pool won the toss and elected to play against the strong wind first half.

A strong start from both sides saw no quarter given in a brutal forwards arm wrestle. The home side certainly dominated the play in terms of possession but Pool defence was keeping the lively runners quiet.

25 mins, Pool were under the cosh but Pool number 8 Tom Johnson make a strong break from his own 22 metre line and links up well with Andrew Foreman and Jon Carney and play enters the home 22. As Pool look to cut Shields open unfortunately the ball is knocked in contact and the danger is averted however the Pool front 8 drives the bigger Shields side off the ball at the resultant scrum.

Pool were dealt a blow when Graham Wilson reacts to late tackle and is sent to the sin bin for 10 minutes.

32 minutes, Pool are penalized for being off side at the ruck and a penalty kick is just wide by Sam Brooks.

The blue and whites used the extra player and feed the live wire backs but Pool are left off the hook when the ball is knocked on 5 metres from the away try line.

The home 10 is then yellow carded for a high tackle .

A loose line out 10 metres out , sees Scott Murphy steak the ball and takes advantage to score under the post. Brooks converts to nudge the score to 10-0.

A lightning break by the home team , sees Pool winger Liam Pape penalised for a deliberate knock and a second Pool player is sent to the sin bin.

Following a period of pressure, the Shields 10, Jack Rendles nudges a drop goal just before the half time whistle to extend the lead to 13-0.

With the wind at Pool's backs, the away side starts to show their attacking prowess and after a period of play, Andy Foreman touches down amongst a body of players but with the referee unsighted the try isn't awarded. However justice is down at the next scrum, 5 metres out Andy Foreman picks up and dives for the try line but is just short. Tom Johnson is on hand to pick up and touch down. Anthony Lawrence converts to bring Pool right back into the game. 13-7.

From the kick off, Pool attack from their own line and winger Liam Pape breaks clear to the half way line with a determined run, the ruck is cleared out , before Alex WInter and Zac Ivey combine . Ivey then create space for himself and he looked favorite to score in the corner but a cracking cover tackle bundles him into touch .

Pool attack from the kick off and wave after wave of attacks results in a series of penalties as Pool are camped in the home 22. A tremendous rear guard action see the Shields defence stretched but keep Pool at bay.

Against the run of the play, after a huge period of pressure and Shields seal the game with a Ben Dalton try, Brooks converts. 27-7.

With two minutes remaining , the away team pressure is rewarded with a second try, Anthony Lawrence joins the backs from full back and after he is stopped, Jon Osbourne strong run creates space for flanker Jon Carney who sprints bast two players to score under the posts. Lawrence's conversion reduces the lead to 27-14.