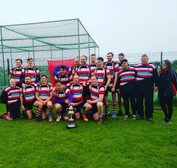 After qualifying group victories over Old Boys, Seaton and Tech and a draw with West both West and Rovers contested the final.

After giving away a lead in the warm up game against West the lads were determined to put things right in the final and were soon on the offensive. However a move on theIr line broke down and West raced the length of the pitch to score. Rovers were not disheartened though and Alex Rochester stepped half the West team to go over under the posts.

Then captain Daz Fawcett went over before West's Andy Turner scored in reply. Danny Cookland put us further ahead with a barrelling run before Randy Railton sealed the win with a final try.

Well done to all 15 Rovers who took part in the games. There were some complaints about West fielding more than the permitted 15 players but at the end of the day this just meant more of them were disappointed.