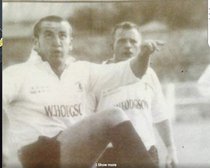 End of an era?

This was billed as Hendo's last game after 30 seasons of senior rugby.

Hendo captained the side which was not as strong as we hoped partly due to Hartlepool Borough Council's Plumbing and Lighting departments robbing of us 2 key forwards by actually making them work. On a Saturday anarl. We did however have the Full Monty team available ie both Jamie and Callum turned out. We had the bare 15 at KO but reinforcements arrived steadily throughout the game.

Horden looked a stronger, more organised side than the one we put 60 points on earlier in the season while we had 9 of that team up on the 1sts and it was no surprise that Horden took the lead. Then it happened. On a wintery day with the sun setting resplendently over the Touchdown bridge Hendo took the ball at pace off the back of a scrum and ploughed through the Horden half backs to score in front of an ecstatic crowd. To add to the Roy of the Rovers moment Hendo added the conversion to put us level. Not long after he went off injured - which was a shame. It was even more of a blow as Alex Rochester also had to withdraw (with a severely disrupted hairdo) and Kieran Wright had been red-carded following his reaction to a clash of heads. As part of the reshuffle Ryan Harrison moved to scrum half and showed some nice touches.

Horden would have been a handful with a full complement and had too much for us with a man down. They scored 5 unanswered tries to lead 41-7 with about 25 minutes to go and it looked like the score was going to get worse. However we really picked our selves up and came back into the game with 3 tries of our own. Phil German forced his way over for a brace before Ste Cotson also got a very well deserved first try for the club and this put a slightly better gloss on the final score of 22-41.

Congratulations to Horden on their win. They were the better side and deserved their victory. For us the mini fightback at the end showed our battling qualities. We need to get better though if we are to remain anywhere near the top of the table. As last week even though we lost we still will be top and indeed should have moved further ahead of the nearest sides to us as they did not play. It was good to see Andrew Arnell, Rob Hilton, Connor White and Jamie Evans back in a Rovers shirt and they contributed well to the cause. Man of the match was Ste Cotson for a full 80 minute performance where he scrummaged , ran, tackled and scored. After Ste had ran over a fairly large Horden prop the lad picked himself up and said "by he is a solid unit" . Praise indeed.

And finally if he has indeed retired then thanks to Hendo for this loyal service as player and captain over such a long period. Though I am hoping he might be tempted by a cameo in the Bill Bowden game against West Stags :-)