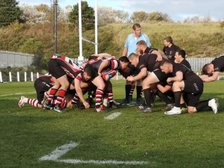 Heughers just miss out on victory

Despite having the majority of chances Rovers Heughers missed out on beating a decent Barnard Castle second team.

A few disappointing no shows and late cry offs were off set by the welcome additions of Squid and Paul Arnell with Squid getting the nod at stand off. Probably 'cos Arnell spent an hour getting a pre match massage off physio Lauren. Paul has already said he is available again for next week. Can't play but he has said he will come for the rub down.

We kicked off into a strong wind and immediately put Barney under pressure which told when Michael Railton went over out wide for an unconverted try. Barney drew level when one of their backs ghosted through a gap. Then we won a ruck but left the ball on the floor and a Barney attacker picked it up to score. 5-12. After more pressure on the Barney line Pinky dummied his way over for a try that Squid converted to bring us level at 12-12. A penalty for handling on the deck was kicked by Barney before Ste Groom split the defence to put us back ahead at 17-12 with a minute and a half to go to half time according to the ref. Instead of tying the ball up we gave it away and Barney scored a breakaway try 2 minutes into injury time.

We now had the advantage of the wind and used it to put us into Barney territory. This seemed to be paying off when Barney gave a penalty away and Squid's kick put us within 2 points at 20-22. We hammered away at the Barney line knowing that any score would put us ahead. However when the ball was passed out at a lineout within their 22 the presence of a couple of very offside defenders distracted us into a loose pass which was picked up by Barney who raced away under the posts for a 20-29 lead. We battled away and Glyn Hewitt was over the line but the referee was on the wrong side of the ruck and could not give the score. It happens. We had further chances to score but good Barney defence kept us out.

This was a pretty disappointing defeat. We had the majority of territory and chances and should really have scored more in the second half. Still the effort cannot be faulted, we just need to play a bit more as a team. Michael Railton did well in the backs and Nathan Olley woke up in time and also had a good game in the back row where he may well benefit from a run of games. The VUE CINEMA man of the match though was Glyn Hewitt who came on at number 8 and the Ginger Chabal's performance will have Callum and Liam Armstrong looking over their shoulders.

Next week we are away at Acklam Talbot in the league. 3pm KO