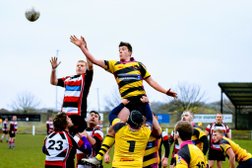 Heughers lose out to late score by league leaders

Pre Xmas games often have more selectorial challenges than usual and this was the case on Saturday with several call ups to the 1st XV and various excuses for cry offs. The most middle class of which was 'I am still on the golf course'. Consett's squad numbers on the other hand were bolstered by their 1st XV game being called off. They were kind enough however to loan us a couple of forwards until ours arrived. James Dixon was pressed into playing for the first time this season and we were also pleased to see Graham Matthews back at the club after too long away and Snotty slotted seamlessly into stand off.

We had the advantage of a strong wind behind us blowing down towards Steetley but it was Consett who scored almost immediately when their winger scooted over for an unconverted try in the corner. We came back into the game and Snotty put over a cross kick that Alex Rochester cleverly waited for the optimum bounce up to go over. With Josh missing the kick we were level at 5-5. Snotty nudged us into the lead with a penalty and put us further ahead by following up his own chip and chase to score and also add the conversion. 15-5. Consett's stand off ghosted through a gap to reduce the lead to 15-10 before Jack Gunn hit a lovely line from 40 metres out to score. With Snotty's conversion we were 22-10 ahead. Consett however scored 2 more unconverted tries before half time.

Consett now had the advantage of the wind, which if anything had got stronger. We however had a few unanticipated but welcome reinforcements to give us more options. AJ and Taz had got way from work earlier than expected as had Scott Buttery plus Muller had got out of minding the kids. The game settled into a competitive phase where Consett were having trouble making the ball stick and we struggling to make headway into the strong wind. Consett did manage a converted try to put them ahead 22-27 and this spurred us onto greater efforts. First of all Josh Healey (who never ceases to surprise nowadays) bounced off not one but two large Consett forwards - though he might have been better passing to an unmarked Pace outside him. Then Taz's twinkling feet took him past several defenders and when he was about to be tackled put in a little dink of a kick. Pervy gathered at speed and handed over to Alex to score a fine try. With Scott Buttery's conversion we were ahead 29-27 with 7 minutes to go. It looked like we would hold out but with only 2 minutes left on the clock when Consett broke a few hearts with a breakaway try. Their winger galloped down the wing and though Alex Rochester hauled him down short of the line one of the following up attackers picked up to score right in the corner. An excellent touchline conversion put Consett ahead 29-34 and they held out till full time.

This was a cracking game given the bitterly cold conditions. Consett are unbeaten in the league and our score was the highest against them and the margin the smallest this season. On balance they probably deserved the victory by means of their greater number of tries scored but we made them work hard for the victory. Consett will remain top of the table but who convinced them to be in the Candy League South division ? Can only assume Disco is in charge of map reading.

From having to borrow two forwards to start the game we actually ended up with 22 players turning out for us. Thanks to everyone who played. If you can only make the second half or whatever that is still better than missing altogether.

Vue cinema man of the match goes to Josh Healey who is playing much better around nowadays. Perhaps not as well as he thinks but still a great improvement :-). Keep working and improving Josh.

There are some photos courtesy of Alan Urwin here https://secure.pitchero.com/admin/club/10314/site-content/photos/view?album_id=850282

Next week we do not have a game so far and the next scheduled games are 1st XV at West in the Boxing Day game and Heughers at home to West Stags in Bill Bowden memorial game on 29 December.

Merry Xmas to everyone. Except West.