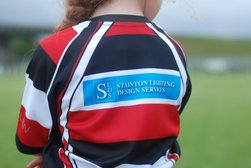 All smiles at Yarm

Rovers u11s headed to Yarm for a festival last Sunday.

Yarm coach and ref Dave did a good job of keeping the game flowing with plenty of great tries from both sides. Everyone played their part with Harry and Emily leading the scoring, although Harvey is catching on quick and scored his first hatrick. Sam, Hayden and Arron were very impressive in defence with Arron also contributing some excellent work.

It’s also interesting to see how the team are developing their rugby skills: George is now first choice kicker (as he can put the ball on a sixpence and won’t give anyone else a go); Charlie is 100% under a high ball; Big Jack has mastered the try-saving cover tackle; Little Jack has worked out that a good try-scoring pass is as rewarding as scoring yourself; Ollie is our Chris Robshaw - makes yards from a standing pass; and Jay has got to be the one of the most technical 10 year old ruck and maul specialist in England!
With try machine Lyla, Olympic swimming hopeful Austin, along with a fully fit Oscar (who still scored a signature try despite being poorly on Sunday) all to return in the next few weeks - this team continue to shape up very well indeed.
Player of the match this week was Jaxon he is playing in his first season of rugby; Jaxon has improved greatly taking the ball in to contact, keep up the good work.

Training on Sunday at 10:30 at Rovers if anyone other year 6s fancy joining this wonderful sport.