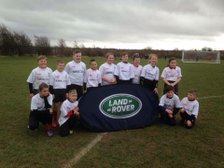 Under 11s enjoy their trip to the seaside.

Rovers’ U11s found themselves in The Mighty Redcar on Sunday, where the weather proved uncharacteristically mild for a December across the Tees estuary.

Kev refereed and did a good job of keeping the game moving, which resulted in plenty of open rugby for both teams. Redcar has a number of quick, tough runners and Rovers’ defence had to work very hard to keep the lads from scoring - it was also a good lesson in counter-rucking with the Redcar pack turning plenty of ball over.

However Rovers’ ball handling skills, hard graft in defence and support play paid off with plenty of tries.
Oscar has shook of his flu and scored a couple from deep, as did ‘Lyla the Flyer’ and Austin who is looking more like his idol Elliott Daly every week! Charlie did well to recover from a bopped nose early on and Arron returned following a nasty finger injury - both lads doing well.
Harvey continues to get stuck in and prefers the tough stuff, but has lightening pace when he feels the need and Hayden continues to develop very well. Sam again held the defensive line making bags of tackles; both Jacks contributed plenty of running and a try from Big Jack and some good handling again from Little Jack.
Players of the Week were definitely the team’s engine room: Harry,Jay and Olly. Harry and Jay never stopped running, tacking and running all day, whilst Olly was back to his best again.

Training next week and we may see the return of two players who are rumoured to be considering a return - JonJo was watching from the stands today and Dan is considering a return. You’d be welcome anytime lads. Logan, Jaxon, George and Emily also all set to return in the next few weeks.