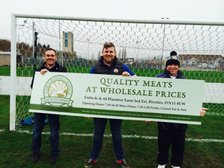 On Tuesday evening we welcome Dinnington Town to the Jones & Co Recreational Ground in Central Midlands League action. We wish a warm welcome to all the players, officials, and supporters of Dinnington.

As always entry for the game is £3 for adults, £2 for concessions and free for members. Toms Tea Room will be open for refreshments and the Pavilion will be open for pre and post-match drinks. Also, the Shaft Side Bar will be open throughout the game for alcoholic beverages and soft drinks. The club’s raffle will also be up for grabs so please remember to purchase your tickets. As always, your support is greatly appreciated.

We have previously had two fixtures on this day, with Colliery losing both of the games. The last time that we played on October 12 was in 2013 when we lost 3-2 at home to Westella & Willerby. Oliver Chappell and Thomas Walker scored the Colliery goals. The only other fixture on this day resulted in a 2-1 defeat away at Sheffield City on Saturday 12th October 2002. Brett Dudley scored the Colliery goal.

We currently sit in seventh position in the league table, with 20 points after 11 fixtures. On Saturday we drew 3-3 away at Clay Cross Town. Lee Edmondson, Bayley Lowe and Ash McEwan got the Colliery goals. On Saturday 2nd October we drew 3-3 away at AFC Phoenix. Ainsley Finney scored twice, with Sam Flowers getting the other Colliery goal. On Saturday 25th September we were defeated 3-0 away at AFC Bentley. Prior to that on Tuesday 21st September we defeated Crowle Colts 6-0 at home. Ainsley Finney scored twice, with Tom Bedford, Luke Black, Bayley Lowe and Jordan Woodhall getting the other Colliery goals.

Moving on to our visitors and Dinnington Town were formed in 2000, joining the Premier Division of the Central Midlands League. In 2001–02 they finished third and were promoted to the Supreme Division. They won the CMFL League Cup in 2002–03 and finished as league runners-up in 2003–04 and 2004–05. After a third consecutive second-place finish in 2005–06 they were promoted to Division One of the Northern Counties East League. In 2007–08 they reached the 3rd Qualifying Round in their debut FA Cup campaign and won promotion to the NCEL Premier Division after winning the Division One title. After winning the League Cup in 2009–10, they were relegated back to Division One at the end of the 2010–11 season. Close to the end of the 2013–14 season, the club announced they were resigning from the league, subsequently re-joining the Central Midlands League for the 2014–15 season, entering the league's North Division. Last season they finished in fourth place in the table, with five wins and four losses coming from their nine games.

They currently sit in sixth position in the table, with 22 points from their opening nine fixtures. On Tuesday 5th October they beat South Normanton Athletic 2-1 at home in the Abacus Lighting Floodlit Cup. Prior to that on Friday 1st October they won 3-1 away at Collingham. On Wednesday 22nd September they were defeated 3-1 away at Newark Town.

The two sides have previously met on 11 occasions, with Colliery winning seven, drawing one and losing three of those meetings. The last time that the sides met was on Saturday 26th October 2019 at Phoenix Park with the game ending 1-1. Luke Fletcher scored for Dinnington, with Chris Belshaw scoring for Colliery.

Next up after this fixture we face Newark Town at home on Saturday 16th October. Previous results at home to Newark Town:

As ever if you can make it to the game your support is always greatly appreciated.