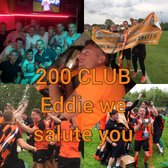 This afternoon sees our Skipper Eddie, Lee Edmondson reach the milestone of 200 League appearances, here he reflects on some of the memories

Eddie its been nearly a decade now at the club an amazing acheivement, who brought you to the club and do you remember anything about your debut?

It was Mark Latham who first brought me down. I had been playing in the same Sunday side as him for a bit and he asked me to come to the Colliery. It was at a time where I had fell out with football but the lads were class, and I’ve made some really good friends since then.

I do remember my debut, it was a friendly away at Rossington Main FC pre-season 2010/11. I had travelled home from Kent that day and it was baking hot! I was asked to play right wing back in 3-5-2, I was up and down like a mad man trying to impress and spewed my guts up in front of all lads at half-time.

What have you most been proud of during your time here?

Racking up 200 league games is pretty decent in itself but it would definitely be captaining the side to promotion during the 2017/18 season. It was a rollercoaster of a season with managerial and player departures, plus a few new faces coming in too. So being able to keep the nucleus of the team together and lift the title on final day at Clay Cross with a top group of lads is top of the pile. I won’t ever forget the scenes that day either; bus full of fans, Orange Army take over their ground and boozer, and the after-party that followed in the Pav was absolutely class!

You have seen the Club progress both on and off the pitch, you even helped with transforming the transdek stand, what would you say has been the biggest improvement you have seen?

Has to be the Shaft Side doesn’t it?! Jokes aside, I’ve seen it all. There wasn’t much going on when I first joined, so credit to you (Jonny) and everyone that has helped get the club and the facilities to where they are now. Biggest improvement would be the overall state of the first team pitch and training pitches. Obviously we’ve needed improvements to go up the leagues but playing on a decent surface at home every week is the one for me.

Also, shout out to those that support us week in week out because we have grown a fantastic following over the years. Another one would be the number of sides that we now have from juniors to seniors, including women and girls teams.

Anything you would change about your time here?

I would have liked to have played more during my early years at the club but for Uni and work commitments. And the obvious one, is to have retained our NCEL status during the 2018/19 season. I still maintain that if we had kept the nucleus of the promotion side together we would have been absolutely sound in that league and still be there now. I think that’s why it frustrates me so much, because the CMFL is such a tough league to get out of and we had all the foundations to hold our own in the league above.

Lifting the CMFL title on the final day at Clay Cross with my mum and dad there.

Favourite Goal?
So many to choose from going through the archives! … but I would say the one away at Askern 2017/18 season. We were 3-1 down with not long left to play, got an assist and scored a belter. It was mid-November and the point maintained the start of a long unbeaten run.

*Also scored a worldie vs AFC Mansfield a couple of pre-seasons back, they had a camera in the net and wouldn’t send me the video, fuming.

Best and worst game involved in?

Best, I’d say the 3-0 win over Retford FC on the second to last game of the season which ultimately sealed our promotion to the NCEL. The game had a bit of spice after events early in the season and we had a few players out, but we got the job done in front of over 330 spectators.

Worst, There’s a couple here beside losing to AFC Emley on the final day of our 2018/19 NCEL campaign which confirmed our fate.

The 4-3 loss at Hallam FC in the FA Vase 2015/16 season – 3 nil up at half-time followed by a disastrous second half. All 7 goals down the slope too.
The 4-3 loss at Easington United (absolutely miles away) cruising 3-0 with about 20 minutes to play and lost! Bren went ape shit and in the following training session we was made to sprint non-stop up the hill in the woods for the same duration that was left in the game from when we first conceded … it was a long 20 minutes up that hill haha.

It’s certainly not Easington United! … I’d probably say Hallam FC - quality crowds, good pints and the lady who does the post-match food has always looked after us. I do also like playing at local teams not because of the grounds as such but because they are derbies; you get a bit of stick and can have a good craic with them.

Favourite season and why?

2012/13 because we had a tough pre-season and pretty much scraped a side together. Our first game of the season away at Dronfield Town (eventual league champions) we were expected to get a good hiding and we turned them over 4-2, I actually scored 2 that day as well. We went on to finish 5th in the league below AFC Mansfield, Clay Cross and Westella, so it was a great effort; everyone would run through brick walls for each other. But the best bit was the “Maga Fund” whereby all our fines would go into a pot and we would go to Magaluf at the end of the season for a team do. It started as a bit of a joke but became reality and pretty much all the lads plus Bren, Jonny and Lee Hellewell went; it was absolute carnage! I will never forget that trip.

Any superstitions whilst playing here?

Not really one for superstitions … a pre-match number two is about it!

Best player played with? Martyn Gee – made defending look easy and would still have cigar on now.

Oooooh that’s a tough one, there’s loads both footballing wise and just to have around – the group of 2012/13.

Not a prank but Corny once said if he scored then Brewster had to cocoa butter his balls – he scored.

G Siddy had a pair of his fresh white socks cut to pieces (not playing socks his trainer ones) … he was fuming but it was also during the full-time berating from Bren after the 4-3 defeat at Easington – plenty of us sat there trying not to laugh.

There’s been a fair few over the years. Some less intentional than others, we’ve had some really daft lads (must attract them). But to name a few:

Lloyd Wilkinson was a like a Duracell bunny – won’t forget Bren shutting him up at Glapwell away … “alright Lloyd have your 5 minutes” = silence.

Si Brewster was a bit mad, and along with Corny it was a bit of a double act.

Aaron Pickersgill is up there at the minute – 100% he was dropped on his head.

Mark Brogan deserves a mention too, he has some absolutely class one liners and is proper good craic in the changing rooms.

Best Trainer? Me (then Timmo and Brooksy)

Shoutout to Ainsley, he can sup em’.

Hopefully you get to play another 200, what changes would you like to see happen in that time, whether that be on or off the pitch

Get back into the NCEL and stay there.

Win a cup – our track record is awful.

More youngsters coming through the production line, they are the future.

I wouldn’t mind water coming out of all the shower heads at the same time!

I would quite like to see a stand across the end bottom of the ground, behind the net.

Some more club social events. I think we should do a pre-season trip away – a bit like we did for the Skegness game where players and fans stayed overnight, that was class.

Thanks to everyone at the club – up the Colliery!