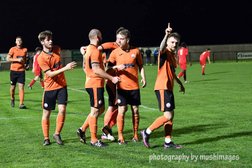 On Saturday we travel to Hall Corner to take on Glapwell in Central Midlands League action. As always, your support is greatly appreciated by everybody at the club. The address for the ground is Hall Corner, Glapwell, Derbyshire, S44 5PZ. Kick off is at 2PM.

We currently sit in 10th position in the league table, with 24 points after 17 fixtures. On Tuesday evening we drew 1-1 with Staveley Miners Welfare Reserves in the Abacus Lighting Floodlit Cup, with Colliery going on to win the game 5-4 on penalties. Bayley Lowe scored our goal. On Tuesday 16th November we drew 3-3 at home to Dearne & District with the Colliery goals coming from Sam Foulds, Bayley Lowe and Ash McEwan. On Tuesday 9th November we beat Heanor Town Reserves 2-0, with Sam Foulds and Bayley Lowe scoring. Prior to that on Friday 5th November we were beaten 5-1 at home to St Joseph’s Rockware of Worksop, with Ash McEwan getting the Colliery goal.

Moving on to our hosts and football in the village of Glapwell undoubtedly has its roots in the facilities provided for the community by the local Colliery. But, with the pit closing in 1974, Glapwell had to wait until the mid-to-late eighties to get its first taste of football at a senior level. In 1989/90, with the sad demise of the Sutton & Skegby League, the Club joined the Central Midlands League, entering the football pyramid for the very first time under the name of Glapwell Football Club and, in their first season, Roger Caton's side were crowned Division One champions, with promotion to the Premier Division. In the 1995/96 season they were promoted to the NCEL and finished in fifth place in their first season. In the 1999/2000 season they were promoted to the NCEL Premier Division and after several seasons of consolidation they were promoted to the UniBond League in time for the 2008/09 season. Unfortunately, the club were forced to resign from the Northern Premier League at the end of the 2010/11 season due to an ongoing dispute over the licence of Hall Corner. They dropped down to Step 7 to join the Central Midlands League North Division for the 2011-12 season. On 22 June 2016 Glapwell confirmed that the club had folded. In July 2020, the newly reformed club with a new chairman, committee, management team, playing squad was accepted in to the Central Midlands League, Division One North and finished in second place, with 10 wins, one draw and three losses coming from their 14 matches, which was enough to gain promotion.

So far this season they sit in sixth position in the table, with 27 points from 15 matches. On Saturday they drew 1-1 at home to Sutton Rovers, with Benjamin Copestake scoring. On Saturday 6th November they lost 3-0 away at Newark Town. Prior to that on Saturday 23rd October they beat St Joseph’s Rockware of Worksop 4-2 at home. Benjamin Copestake and Charlie Reeves scored their goals.

One to watch for our hosts will be Benjamin Copestake. So far this season he has scored 17 times in 14 appearances.

The two sides have previously met on 10 occasions, with Colliery winning three, drawing four and losing three of those meetings. The last time that the sides met was on Saturday 28th November 2015, with Glapwell winning 3-0 at the Jones & Co Recreational Ground. Ryan Cancellara and Adam Kimberley scored for Glapwell.

Next up after this fixture we face AFC Phoenix at home on Saturday 4th December. Previous results at home to AFC Phoenix: