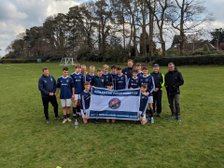 The Harriers kept up their 100% record with another dazzling performance against 2nd place Hook United at Camelsdale Rec to move two points clear at the top of Division 2.

The scoreline doesn’t reflect what a strong team Hook were but the Harriers continued their great start to the season with strong performances from the entire team. Sam looked super confident in goal and was never really troubled, whilst our defence this week, James F, with Charlie and Alistair either side of him, weren’t letting anyone near goal. Nathan has found his forte in a protective role in front of defence whilst his partner in centre midfield, Finlay is on fire in a more attacking role. With Toby, Raff and James causing havoc in the wide roles and Tom and Thomas both in fine form, the boys get better as a team every week.

The most pleasing aspect this week was the way the boys put in maximum effort and were first to the ball particularly in the second half.

Toby was our man of the match this week – playing some superb through balls to the forwards whilst putting in some brilliant tackles.

The result of these brilliant performances is that we’ve been given the chance to move up a division. Paul and I feel this is absolutely the right thing to do so, from October we’ll be playing in division 1.