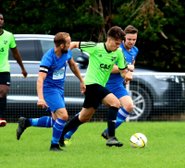 Hatfield Town are pleased to announce the singing of 7 new players, all of which are of a high calibre and have enjoyed success at clubs across the region.

Beck's first signing was Jon Mcgrandles, a 2x Spartan Premier winner with Royston & Welwyn Garden City. Described as an "experienced, commanding, rock of a centre-half" by Beck on the clubs twitter.

Next to sign is Ben Andreos, who joins the club after successful goalscoring careers at many clubs including Cockfosters, Northwood and Hoddesdon. An out-and-out number 9 who can score plenty.

Third signing is 6ft 4 Guy Hammersley, a former Hertford Town and Cockfosters central midfielder, who can play the ball and is also a natural leader.

Beck's fourth signing is Luke Glover, another 6ft 4 player, this time a goalkeeper. Signing from UCFB First, he is great with his feet and a wicked shot stopper.

6ft 4 again, this time former Wodson Park and Hertford Town Central Midfielder Chris Tye. He protects the back 4, and hits hard in a tackle.

Next is an international player, American Brian Simpson signs on a dual registration with Hertford Town. A creative ball-playing midfielder who loves to make things happen.

Beck's 7th signing is Kosi Basden, on the edge of playing international football for Bermuda's National Team, he can play anywhere across the attack, Beck said: "he's tricky & scores goals".