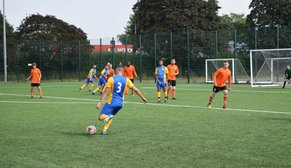 We would like to thank our good friends at Bush Hill rangers for hosting us for their first game back. A special thanks to Mus for his hard work in arranging the fixture and resurrecting a great club.

The game was an excellent competition between the two sides, as both fought hard to come out as winner in a friendly that showed real quality amongst all involved.

Both of towns goals were scored by Man of the Match Darren O'Brien, with club Captain Jack Sheldrake providing assists for both.

The first saw O'Brien latch onto a through ball behind the Ranger's defence, to then finish calmly around the keeper. The second goal was quite spectacular, with O'Brien plucking a Sheldrake long ball out of the air, to then look up, and dink it over the Ranger's keeper.

A excellent afternoon of football, and we wish Bush Hill Rangers a successful season, and many more after.