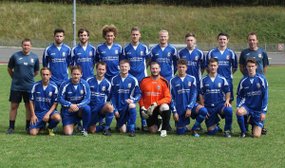 Work to do for Town

With the return of several key players, the Blue Boys were confident of an improved performance, and so it looked to start with,with Hatfield playing some good effective football, and it got better when Darren O'Brien volleyed a great shot from distance, giving the Bedford keeper no chance at all.

Then for some unknown reason the Hatfield "wheels came off" and with Bedford re grouping and playing some great passing football, it was a completely different game, and it was no surprise when on 30 minutes Bedford equalised on 30 minutes, and went on to add two more before the interval, Sheldrake, Newton and O'Brien worked tirelessly to stem the tide, but it was Hatfield Town 1 Bedford 3 at half time.

The second half was no better for Hatfield, and with Sheldrake going off just after the re-start with an injured ankle, things did not look good for the hosts, Bedford scored again on 70 minutes to wrap things up Hatfield Town 1 Bedford 4.

The Hatfield man of the match was Darren O' Brien.