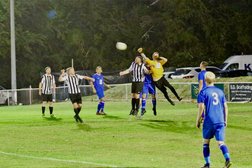 Much improved Hatfield get well deserved 3 points, to make it 6 games unbeaten against local rivals in all competitions.

Hatfield Town produced a fighting performance against Codicote to gain their first win of the season, but of course as to be expected in this local derby, it wasn't all one way. It was fairly even in the first half, with an enthusiastic Codicote getting the better chances.

Hatfield keeper Jaidon Dooley was in top form and dominated his area, proving why he's Hatfield number 1. The Cod Army could have taken the lead if not for his stellar performance.

The first half saw lots of excellent football from both sides, and Hatfield also had some good chances, but at the interval it was goalless.

The second half saw Hatfield take more control of the game, and the Blue Boys played some great passing football. On 49 minutes Tyrell Samuda beat two Codicote defenders down the left wing, and scored a brilliant goal from distance at an acute angle to put Hatfield in front.
This goal reignited the Codicote performance , and on 54 minutes they got an equaliser.

This equalizer set up a frantic remainder of the game, and it was a highly entertaining local derby. hatfield Town piled on the pressure, with Codicote defending well, and the Codicote keeper making some excellent saves.

On 86 minutes the drama intensified when Hatfield were awarded a penalty for a hand ball in the area, up stepped Darrell O'Brien, and his scuffed effort was nearly stopped by the Cod keeper, but the ball spun into the back of the net.

It was still dramatic until the end with both sides striving for more goals, a great local derby, and an improved display from the Blue Boys.

The Hatfield man of the match was keeper Jaidon Dooley, a brilliant performance.