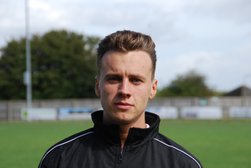 Josh has taken up the post of First Team Assistant Manager to Ben Cowling, and is sure to add greatly to the coaching quality at the club.

"I'm absolutely delighted to be joining Haverhill Rovers as the number 2. From the moment I walked in I was extremely impressed by the facilities and once Ben told me the club's ethos and I learnt more about him, there was no doubt in my mind. The club has a great community feel and even the small things like the first team coming into watch the U18's after training impressed me. I'm looking forward to getting started and I'm confident Ben and I can take the club where it wants to go."

Josh spent his early playing career at Aston Villa academy before eventually being released. At the age of 18 he joined the Mentors of Excellence football scheme and from there went to play for Stalybridge Celtic Reserves. After a short stint at Stalybridge he then moved to Australia to join Shamrock Rovers Perth who play in the Western Australia State League.

Upon returning to England in 2013, Josh completed his FA Level 2 badge and worked with Sporting Khalsa U21 and Ladies side as a coach. The following season Josh moved to Wolverhampton Sporting from the West Midlands Regional league (step 6) as assistant manager.

Eager to expand his footballing experience Josh took up an opportunity to move abroad once again in early 2015, working as a coach for CD Nreja located in Spain. For the second half of last year, Josh moved to The Gambia where he successfully completed his CAF B License whilst working as assistant manager at Real de Banjul.

Josh has recently located to this part of the world and we wish him a long stay at the club.