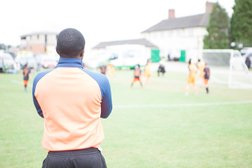 HAYLE 1STS GET FIRST 3 POINTS OF THE SEASON

Hayle 1sts took maximum points in their second game of the season as the comfortably ran out winners against St Just.

At a windy Trevassack Park, Hayle began strongly against the wind but were dominant upfront and went in leading 3-0 at the break.

Cameron Irish made it 1-0 firing low passed the keeper in a one-on-one. Soon after it was 2-0 when the ball broke on the half way line, Craig Wilcox took advantage and had a clear run through on goal to slot finely in the bottom left hand corner. Billy Foster made it 3 soon after, a quick free kick between Scott James and Wilcox who sent a through ball past the St Just defence to Foster who again beat the keeper with a fierce fight-footed effort.

Danny Ford was brought on just after half time by managers John Richards and Andy Tasker, which lead on to more goals being scored by the home side. Ford who scored a header, volley and finished of a one on one chance put St Just out of sight but his pick of the goals came from a sublime free-kick from outside of the box, leaving the keeper with no chance of saving.

St Just did pull a goal back through Toby Angwin, a fine shot from 30 yards but before hand Hayle seemed to stop as they thought they should have been awarded a free-kick# which the referee waved away.

Hayle will now entertain Illogan this coming Saturday the 20th, kick off 3pm.