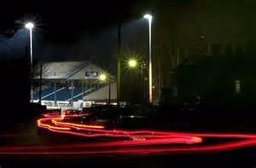 The first match to be played by a team representing Haywards Heath was in March 1888, which provided the impetus for the formation of ‘Haywards Heath Juniors’. After a brief change of name to ‘Excelsior’ in 1894, the club adopted the name ‘Haywards Heath FC’ in 1895.
Without a home ground, the club led a somewhat nomadic existence in its early days, playing most of its games away until 1895 when it was offered the use of the field in South Road which was later to become Victoria Park and the club’s home venue until 1952.

Haywards Heath FC lifted its first silverware in 1900 when it won the Sussex Junior Cup and played in the Mid-Sussex League of which it was a founding member. 1901-1906 saw the club finish as runners up in the senior division in four of its first five seasons, then division 2 winners in 1911-12 after relegation in 1908. In 1919-20 Haywards Heath were Mid-Sussex League champions without losing a game. They won the title again in 1922-23 and went on to retain it for the next two seasons, losing only one match in each season.

In 1926 the club transferred to the Brighton, Hove & District League and, after winning the league title at the very first attempt, joined the Sussex County League the following year. The first five seasons in the County League (1926-1932) saw the club finish in the top four but they were sadly to finish bottom of the league in the 1932-33 season.

In 1952 the club finally moved from Victoria Park to the newly finished Hanbury Stadium which enabled it to join the Metropolitan League which included the reserve sides of professional clubs such as West Ham, Tottenham, Chelsea and Arsenal. After a promising first season finishing in fifth place, the club struggled against the professional opposition and, finishing bottom in 1960-61, elected to re-join the Sussex County League.

On the rebranding of the Sussex County League to the Southern Combination Football League in 2015, the 2nd division was renamed Division 1 and the title was won that first season, earning Haywards Heath Town FC promotion to the Premier Division. The club finished top of the Premier division the following season (2016-17) and were due to be promoted to the Isthmian League.

Unfortunately, promotion was denied following a nine-point deduction, due to an inadvertent off-field administrative error, which saw the championship awarded elsewhere.
The club however, responded in style by winning the Premier Division again in the 2017-18 season, this time adding the Peter Bentley League Challenge Cup.

Heath enjoyed a successful 2018-19 debut in the Isthmian League, finishing in a very respectable fifth position which qualified them for the play-offs at the first attempt. They were eliminated by Horsham who went on to win promotion to the Premier Division.
As well as achieving the club’s highest ever finishing position in the non-league football pyramid, Shaun Saunders’ squad also reached the final of the Sussex RUR Cup and the semi-finals of the Sussex County Senior Cup. Our Senior Cup run included a famous away win at Crawley Town.

Last season the club appeared to be struggling at the half way stage but this was in part due to a good run in the FA Trophy. Once this distraction was ended by Royston Town our league form looked up. Prior to our final game against Phoenix Sports we had won four in a row. The rest, is as they say history, because a few days later football was rightly suspended.
After one of the longest between season breaks for many a year, we are looking forward to playing again and hopefully challenging at the top of the table.

Hanbury Stadium has been renamed the ‘Thank You NHS Stadium’ in tribute to the brave NHS workers who have all performed above and beyond throughout the Covid 19 pandemic.