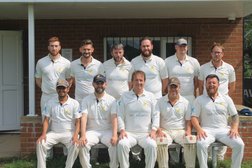 7 up for Bruce in Posties romp

The Posties welcomed Kippax Welfare to the club and had one eye on the weather, the toss was lost as is tradition, and Kippax chose to bat.

The Posties had Brian Bruce Dunbar in exuberant form following his morning appearance on Cricket AM ‘Speed Gun’ – the Posties welcomed Will Clifton back after a long injury lay off, and the two of them quickly applied the pressure.

After a few tight overs where Kippax failed to get off the market a single finally came which allowed Bruce a shot at Clarkson – having carefully studied his game Bruce produced exactly what was needed first ball up with a snorting Yorker rattling the stumps. Will Clifton quickly got into the act – Chapman looked as though he was going to have a go, and tried unsuccessfully to get after Will, he only succeeded in chipping up a catch to Stelfox in the covers.

Skipper Illingworth was next to depart, being clean bowled by Bruce, Hall offered some resistance as the Posties continued to attack but Dunbar was in irresistible form as he rattled through the visitors taking a Posties season’s best of 7-11 off 9.2 overs as Kippax crashed to 39 all out – the ball to dismiss Kippax danger man Hogg first ball was an absolute peach, jagging back a mile to knock back the off stump as Hogg surrendered arms. Bruce starts our next game on a hatrick

Jim Hinks and Chris St Clair Whicker opened up for the Posties and both looked in reasonable nick – Jim clipping a nice 4 off his legs early on, and Chris hitting a monster straight drive for 6, before the pair fell in quick succession, Chris for 12 and Jim for 15, Matt Williams kept up the momentum and was joined by skipper to finish matters of for a comfortable victory.

Bruce’s good day continued when he was recognised in the Victory Pub and Kitchen by someone who had seen him on Cricket AM.