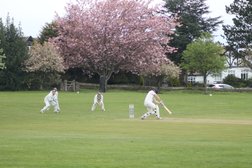 Old Leos were the visitors to Old Lane in round 2. Ashley & Dalby gave Headingley Bramhope a great start moving the score to 49 before Ashley was caught on the boundary for 26 by Tashmial Henry off the bowling of Oliver Deane, Dev Kumar joined Dalby in the middle and kept the scoreboard ticking nicely taking HBCC to 71 before Dalby picked out Oliver Deane who repaid the favour to Henry by taking the catch. Chris Whicker Smith looked in decent nick before being given out LBW for 10, Dev was combining quick single with his usual expansive stroke play and with Sunil Bhogulkar too the score along to 111 before Sunil was bowled by Henry.
Steve Costello was promoted up the order in the knowledge that if we got a few overs off ‘cossie’ the tins would be rattling around at a decent rate, as it turned out he went 1st ball, clean bowled by Henry, veteran Steve Manton was looking in busy form before a severe buttock tweak stopped him in his tracks and he had to retire hurt.
Dev Kumar was the 7th man out, for an invaluable 48, the tail kept trying to wag for HBCC , but Henry kept picking up wickets, HBCC finishing on 160-8 with Steve Gilks 6* and Mark Stelfox 9*, Tashmial Henry finished with 6-43 for the visitors, Oliver Deane 2-34.

Shayan Siddiqui & Chris Butt opened the Old Leos response, aging swingers Will Clifton and Mark Stelfox opened the Headingley Bramhope attack. The opening exchanges were a game of cat and mouse, the bowlers offering the batsmen little in the way of loose deliveries and the batsmen being watchful, a breakthrough came in the 8th over when Stelfox nipped one back to the left-handed Siddiqui and bowled him (assist claimed by Chris Ashley and his decision to stand up to the stumps), 3-1 at the end of the 8th.
The arrival of overseas Tashmial Henry saw something of swing in momentum, as he set about anything remotely loose, one shot off Clifton cleared Old Lane and was found somewhere near the river in Pool in Wharfedale, Chris Butt was quietly going about his business at the other end doing an excellent job for Leos, Henry had a couple of leading edges which from a HBCC perspective fell frustrating just out of the fielder’s grasp, but the momentum was firmly with Old Leos at this point.

Butt and Henry moved Leos to 100 before Dalby snared Henry LBW, for 66 with his 2nd delivery, Butt & Din took the score along to 117 before Costello sent Din back for 4, with Butt taking over responsibility for his team Old Leos got to 154 without too much drama , but after Dalby claiming Huby’s wicket the momentum shifted again, 154-3 in the 35th over became 155-8 by the 38th over.
Nick Boyes kept his composure for Leos, waiting for the right momentum and then seeing his team over the line, Boyes finished 8 not out.